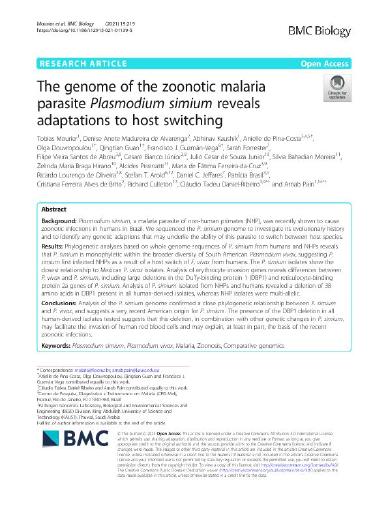 Abstract Background Plasmodium simium, a malaria parasite of non-human primates (NHP), was recently shown to cause zoonotic infections in humans in Brazil. We sequenced the P. simium genome to investigate its evolutionary history and to identify any genetic adaptions that may underlie the ability of this parasite to switch between host species. Results Phylogenetic analyses based on whole genome sequences of P. simium from humans and NHPs reveals that P. simium is monophyletic within the broader diversity of South American Plasmodium vivax, suggesting P. simium first infected NHPs as a result of a host switch of P. vivax from humans. The P. simium isolates show the closest relationship to Mexican P. vivax isolates. Analysis of erythrocyte invasion genes reveals differences between P. vivax and P. simium, including large deletions in the Duffy-binding protein 1 (DBP1) and reticulocyte-binding protein 2a genes of P. simium. Analysis of P. simium isolated from NHPs and humans revealed a deletion of 38 amino acids in DBP1 present in all human-derived isolates, whereas NHP isolates were multi-allelic. Conclusions Analysis of the P. simium genome confirmed a close phylogenetic relationship between P. simium and P. vivax, and suggests a very recent American origin for P. simium. The presence of the DBP1 deletion in all human-derived isolates tested suggests that this deletion, in combination with other genetic changes in P. simium, may facilitate the invasion of human red blood cells and may explain, at least in part, the basis of the recent zoonotic infections.

The work was supported financially by the King Abdullah University of Science and Technology (KAUST) through the baseline fund BRF1020/01/01 to AP and BAS/1/1056-01-01 to STA, and the Award No. URF/1/1976-25 from the Office of Sponsored Research (OSR). The field work in the Atlantic Forest and laboratory analysis in Brazil received financial support from the Secretary for Health Surveillance of the Ministry of Health through the Global Fund (agreement IOC-005-Fio-13), Programa Nacional de Excelência (PRONEX) and contract 407873/2018-0 of the Conselho Nacional de Desenvolvimento Científico e Tecnológico (CNPq), the Fundação de Amparo à Pesquisa do Estado de Minas Gerais (Fapemig CBB-APQ-02620-15) and the Fundação Carlos Chagas Filho de Amparo à Pesquisa do Estado do Rio de Janeiro (Faperj), Brazil. CNPq supports CFAB, CTDR, MFFC, PB and RLO, with a research productivity fellowship. CTDR (CNE: E-26/202.921/2018), MFFC, PB and RLO are also supported by Faperj as Cientistas do nosso estado. AdP-C was supported by a postdoctoral fellowship from the Faperj and DAMA by a fellowship from the CGZV-SVS (Brazilian Ministry of Health) TED 49/2018 grant. SF was supported by a Wellcome Seed Award in Science to DCJ (208965/Z/17/Z).

Except where otherwise noted, this item's license is described as This article is licensed under a Creative Commons Attribution 4.0 International License, which permits use, sharing, adaptation, distribution and reproduction in any medium or format, as long as you give appropriate credit to the original author(s) and the source, provide a link to the Creative Commons licence, and indicate if changes were made. The images or other third party material in this article are included in the article's Creative Commons licence, unless indicated otherwise in a credit line to the material. If material is not included in the article's Creative Commons licence and your intended use is not permitted by statutory regulation or exceeds the permitted use, you will need to obtain permission directly from the copyright holder. To view a copy of this licence, visit http://creativecommons.org/licenses/by/4.0/. The Creative Commons Public Domain Dedication waiver (http://creativecommons.org/publicdomain/zero/1.0/) applies to the data made available in this article, unless otherwise stated in a credit line to the data.