Diversity and distribution of marine heterotrophic bacteria from a large culture collection. 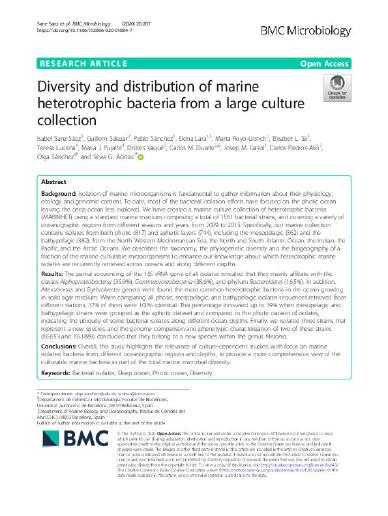 BACKGROUND:Isolation of marine microorganisms is fundamental to gather information about their physiology, ecology and genomic content. To date, most of the bacterial isolation efforts have focused on the photic ocean leaving the deep ocean less explored. We have created a marine culture collection of heterotrophic bacteria (MARINHET) using a standard marine medium comprising a total of 1561 bacterial strains, and covering a variety of oceanographic regions from different seasons and years, from 2009 to 2015. Specifically, our marine collection contains isolates from both photic (817) and aphotic layers (744), including the mesopelagic (362) and the bathypelagic (382), from the North Western Mediterranean Sea, the North and South Atlantic Ocean, the Indian, the Pacific, and the Arctic Oceans. We described the taxonomy, the phylogenetic diversity and the biogeography of a fraction of the marine culturable microorganisms to enhance our knowledge about which heterotrophic marine isolates are recurrently retrieved across oceans and along different depths. RESULTS:The partial sequencing of the 16S rRNA gene of all isolates revealed that they mainly affiliate with the classes Alphaproteobacteria (35.9%), Gammaproteobacteria (38.6%), and phylum Bacteroidetes (16.5%). In addition, Alteromonas and Erythrobacter genera were found the most common heterotrophic bacteria in the ocean growing in solid agar medium. When comparing all photic, mesopelagic, and bathypelagic isolates sequences retrieved from different stations, 37% of them were 100% identical. This percentage increased up to 59% when mesopelagic and bathypelagic strains were grouped as the aphotic dataset and compared to the photic dataset of isolates, indicating the ubiquity of some bacterial isolates along different ocean depths. Finally, we isolated three strains that represent a new species, and the genome comparison and phenotypic characterization of two of these strains (ISS653 and ISS1889) concluded that they belong to a new species within the genus Mesonia. CONCLUSIONS:Overall, this study highlights the relevance of culture-dependent studies, with focus on marine isolated bacteria from different oceanographic regions and depths, to provide a more comprehensive view of the culturable marine bacteria as part of the total marine microbial diversity.

We are grateful to Vanessa Balagué for helping in the laboratory. We thank our fellow scientists and the crew and chief scientists of the different cruise legs for the smooth operation in the ATP, MIFASOL and Malaspina expeditions. We thank the people and sponsors who participated in the Tara Oceans Expedition 2009–2013 (http://oceans.taraexpeditions.org) for collecting some of the samples for culturing used in this study. This is Tara Oceans contribution paper number 107.