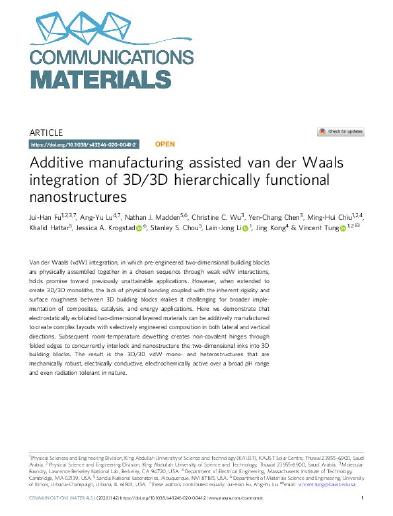 Van der Waals (vdW) integration, in which pre-engineered two-dimensional building blocks are physically assembled together in a chosen sequence through weak vdW interactions, holds promise toward previously unattainable applications. However, when extended to create 3D/3D monoliths, the lack of physical bonding coupled with the inherent rigidity and surface roughness between 3D building blocks makes it challenging for broader implementation of composites, catalysis, and energy applications. Here we demonstrate that electrostatically exfoliated two-dimensional layered materials can be additively manufactured to create complex layouts with selectively engineered composition in both lateral and vertical directions. Subsequent room-temperature dewetting creates non-covalent hinges through folded edges to concurrently interlock and nanostructure the two-dimensional inks into 3D building blocks. The result is the 3D/3D vdW mono- and heterostructures that are mechanically robust, electrically conductive, electrochemically active over a broad pH range and even radiation tolerant in nature