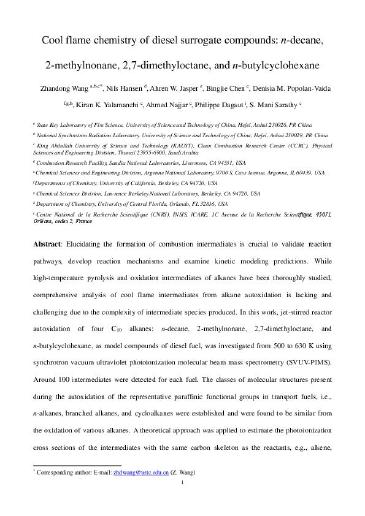 Elucidating the formation of combustion intermediates is crucial to validate reaction pathways, develop reaction mechanisms and examine kinetic modeling predictions. While high-temperature pyrolysis and oxidation intermediates of alkanes have been thoroughly studied, comprehensive analysis of cool flame intermediates from alkane autoxidation is lacking and challenging due to the complexity of intermediate species produced. In this work, jet-stirred reactor autoxidation of four C10 alkanes: n-decane, 2-methylnonane, 2,7-dimethyloctane, and n-butylcyclohexane, as model compounds of diesel fuel, was investigated from 500 to 630 K using synchrotron vacuum ultraviolet photoionization molecular beam mass spectrometry (SVUV-PIMS). Around 100 intermediates were detected for each fuel. The classes of molecular structures present during the autoxidation of the representative paraffinic functional groups in transport fuels, i.e., n-alkanes, branched alkanes, and cycloalkanes were established and were found to be similar from the oxidation of various alkanes. A theoretical approach was applied to estimate the photoionization cross sections of the intermediates with the same carbon skeleton as the reactants, e.g., alkene, alkenyl keto, cyclic ether, dione, keto-hydroperoxide, diketo-hydroperoxide, and keto-dihydroperoxide. These species are indicators of the first, second, and third O2 addition reactions for the four C10 hydrocarbons, as well as bimolecular reactions involving keto-hydroperoxides. Chemical kinetic models for the oxidation of these four fuels were examined by comparison against mole fraction of the reactants and final products obtained in additional experiments using gas chromatography analysis, as well as the detailed species pool and mole fractions of aforementioned seven types of intermediates measured by SVUV-PIMS. This works reveals that the models in the literature need to be improved, not only the prediction of the fuel reactivity and final products, but also the reaction network to predict the formation of many previous undetected intermediates.

We would like to thank Dr. Kuiwen Zhang and Dr. William J. Pitz for sharing the n-butylcyclohexane kinetic model. This work was supported by: National Natural Science Foundation of China (51976028, 91541201); National Key Research and Development Program of China (2019YFA0405602); King Abdullah University of Science and Technology (KAUST), Office of Sponsored Research (OSR) under Award No. OSR-2016-CRG5-3022; KAUST Clean Fuels Consortium (KCFC) and its member companies; Director, Office of Energy Research, Office of Basic Energy Sciences (BES), Chemical Sciences Division of the U.S. Department of Energy (USDOE), Gas Phase Chemical Physics Program, under Contract No. DE-AC02-05CH11231; and European Research Council under FP7/2007-2013/ERC Grant 291049-2G-CSafe (P.D.). The Advanced Light Source is supported by the Director, Office of Basic Energy Sciences, of the U.S. Department of Energy under Contract No. DE-AC02-05CH11231. Sandia National Laboratories is a multimission laboratory managed and operated by National Technology and Engineering Solutions of Sandia, LLC. a wholly owned subsidiary of Honeywell International, Inc. for the U.S. Department of Energy's National Nuclear Security Administration under contract DE-NA0003525. The work at Argonne was supported by the U. S. Department of Energy, Office of Basic Energy Sciences, Division of Chemical Sciences, Geosciences, and Biosciences, under Contract Number DE-AC02-06CH11357.