Behavioral and brain- transcriptomic synchronization between the two opponents of a fighting pair of the fish Betta splendens. 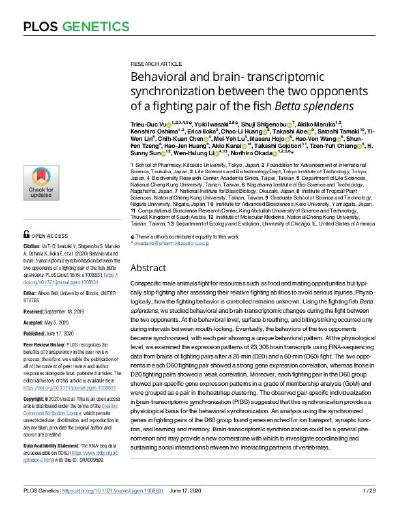 Conspecific male animals fight for resources such as food and mating opportunities but typically stop fighting after assessing their relative fighting abilities to avoid serious injuries. Physiologically, how the fighting behavior is controlled remains unknown. Using the fighting fish Betta splendens, we studied behavioral and brain-transcriptomic changes during the fight between the two opponents. At the behavioral level, surface-breathing, and biting/striking occurred only during intervals between mouth-locking. Eventually, the behaviors of the two opponents became synchronized, with each pair showing a unique behavioral pattern. At the physiological level, we examined the expression patterns of 23,306 brain transcripts using RNA-sequencing data from brains of fighting pairs after a 20-min (D20) and a 60-min (D60) fight. The two opponents in each D60 fighting pair showed a strong gene expression correlation, whereas those in D20 fighting pairs showed a weak correlation. Moreover, each fighting pair in the D60 group showed pair-specific gene expression patterns in a grade of membership analysis (GoM) and were grouped as a pair in the heatmap clustering. The observed pair-specific individualization in brain-transcriptomic synchronization (PIBS) suggested that this synchronization provides a physiological basis for the behavioral synchronization. An analysis using the synchronized genes in fighting pairs of the D60 group found genes enriched for ion transport, synaptic function, and learning and memory. Brain-transcriptomic synchronization could be a general phenomenon and may provide a new cornerstone with which to investigate coordinating and sustaining social interactions between two interacting partners of vertebrates.

This study was completed at the Foundation for Advancement of International Science (FAIS) and Kitasato University, Japan. We thank Mr. Y. Otake, a president of FAIS, and Mr. T. Sugino, a president of ZENICK Corp., for support. We thank Drs. P-W. Gean and K. Yamaguchi for discussions and the preliminary analysis of the data. We are also grateful to Drs. K. Honma, J. Wang and S. Nishimura for critical reading of the manuscript, to Ms. A. Koizumi for improving the quality of the figures, and to Mr. K. Onodera at FAIS for assistance. We thank Drs. Alison Bell (Guest Editor), Gregory Barsh (Editor-in-Chief), and the three anonymous reviewers for their constructive comments, which have improved the manuscript.