No Place Like Home? High Residency and Predictable Seasonal Movement of Whale Sharks Off Tanzania 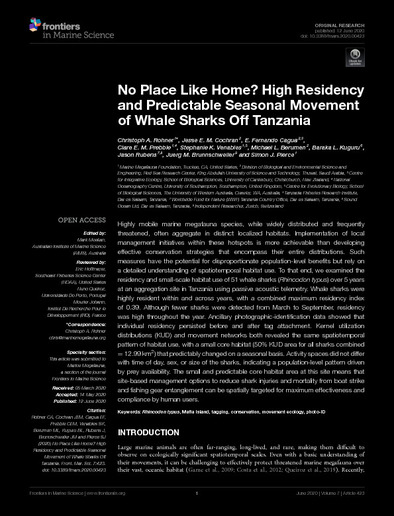 Highly mobile marine megafauna species, while widely distributed and frequently threatened, often aggregate in distinct localized habitats. Implementation of local management initiatives within these hotspots is more achievable than developing effective conservation strategies that encompass their entire distributions. Such measures have the potential for disproportionate population-level benefits but rely on a detailed understanding of spatiotemporal habitat use. To that end, we examined the residency and small-scale habitat use of 51 whale sharks (Rhincodon typus) over 5 years at an aggregation site in Tanzania using passive acoustic telemetry. Whale sharks were highly resident within and across years, with a combined maximum residency index of 0.39. Although fewer sharks were detected from March to September, residency was high throughout the year. Ancillary photographic-identification data showed that individual residency persisted before and after tag attachment. Kernel utilization distributions (KUD) and movement networks both revealed the same spatiotemporal pattern of habitat use, with a small core habitat (50% KUD area for all sharks combined = 12.99 km2) that predictably changed on a seasonal basis. Activity spaces did not differ with time of day, sex, or size of the sharks, indicating a population-level pattern driven by prey availability. The small and predictable core habitat area at this site means that site-based management options to reduce shark injuries and mortality from boat strike and fishing gear entanglement can be spatially targeted for maximum effectiveness and compliance by human users.

We thank Liberatus Mokoki and his team for their assistance in the field, and Mathias Igulu, Haji Machano, Paul Kugopya, Sware Semesi, and the WWF Tanzania team, as well as Amin Abdallah from the Mafia Island Marine Park for facilitating the project. Thanks to Carlos Omari and the team at Whale Shark Lodge and to Jean & Anne de Villiers for hosting us. We thank Tane Sinclair-Taylor, Royale Hardestine, Kenny Wolfe, Jens Paulsen, Rilke Ballero, Alexandra Watts, Stella Diamant, Sophia Lind, Lydie Couturier, David Robinson, and Danielle Keates and David von Helldorff of Mafia Island Diving for their help in the field and Alina Riensema and Michael Pfundt for help with photo-ID processing. We thank all citizen scientists who contributed photo-ID data, particularly the team from Kitu Kiblu. Thanks also to the MMF team and board for administrative support.