The Apocarotenoid Zaxinone Is a Positive Regulator of Strigolactone and Abscisic Acid Biosynthesis in Arabidopsis Roots. 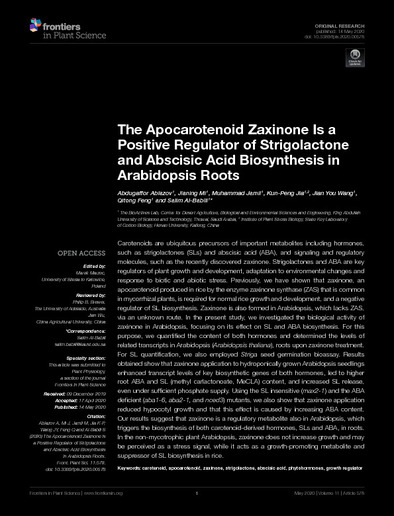 Carotenoids are ubiquitous precursors of important metabolites including hormones, such as strigolactones (SLs) and abscisic acid (ABA), and signaling and regulatory molecules, such as the recently discovered zaxinone. Strigolactones and ABA are key regulators of plant growth and development, adaptation to environmental changes and response to biotic and abiotic stress. Previously, we have shown that zaxinone, an apocarotenoid produced in rice by the enzyme zaxinone synthase (ZAS) that is common in mycorrhizal plants, is required for normal rice growth and development, and a negative regulator of SL biosynthesis. Zaxinone is also formed in Arabidopsis, which lacks ZAS, via an unknown route. In the present study, we investigated the biological activity of zaxinone in Arabidopsis, focusing on its effect on SL and ABA biosynthesis. For this purpose, we quantified the content of both hormones and determined the levels of related transcripts in Arabidopsis (Arabidopsis thaliana), roots upon zaxinone treatment. For SL quantification, we also employed Striga seed germination bioassay. Results obtained show that zaxinone application to hydroponically grown Arabidopsis seedlings enhanced transcript levels of key biosynthetic genes of both hormones, led to higher root ABA and SL (methyl carlactonoate, MeCLA) content, and increased SL release, even under sufficient phosphate supply. Using the SL insensitive (max2-1) and the ABA deficient (aba1-6, aba2-1, and nced3) mutants, we also show that zaxinone application reduced hypocotyl growth and that this effect is caused by increasing ABA content. Our results suggest that zaxinone is a regulatory metabolite also in Arabidopsis, which triggers the biosynthesis of both carotenoid-derived hormones, SLs and ABA, in roots. In the non-mycotrophic plant Arabidopsis, zaxinone does not increase growth and may be perceived as a stress signal, while it acts as a growth-promoting metabolite and suppressor of SL biosynthesis in rice.

We are thankful to Prof. Koichi Yoneyama and Prof. Yukihiro Sugimoto for providing SL standards, and Prof. Binne Zwanenburg for providing GR24. We thank Ms. Lamis Berqdar for technical support. Funding. This work was supported by baseline funding and a Competitive Research Grant (CRG2017) given to SA-B from King Abdullah University of Science and Technology.