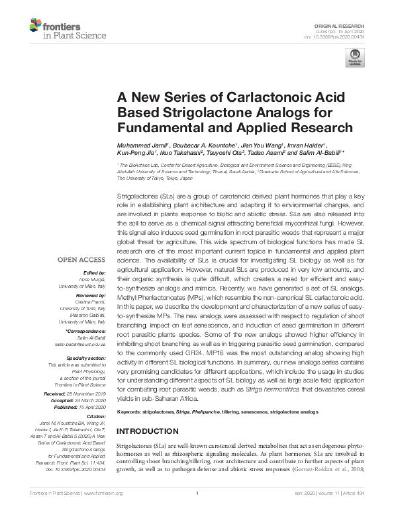 Strigolactones (SLs) are a group of carotenoid derived plant hormones that play a key role in establishing plant architecture and adapting it to environmental changes, and are involved in plants response to biotic and abiotic stress. SLs are also released into the soil to serve as a chemical signal attracting beneficial mycorrhizal fungi. However, this signal also induces seed germination in root parasitic weeds that represent a major global threat for agriculture. This wide spectrum of biological functions has made SL research one of the most important current topics in fundamental and applied plant science. The availability of SLs is crucial for investigating SL biology as well as for agricultural application. However, natural SLs are produced in very low amounts, and their organic synthesis is quite difficult, which creates a need for efficient and easy-to-synthesize analogs and mimics. Recently, we have generated a set of SL analogs, Methyl Phenlactonoates (MPs), which resemble the non-canonical SL carlactonoic acid. In this paper, we describe the development and characterization of a new series of easy-to-synthesize MPs. The new analogs were assessed with respect to regulation of shoot branching, impact on leaf senescence, and induction of seed germination in different root parasitic plants species. Some of the new analogs showed higher efficiency in inhibiting shoot branching as well as in triggering parasitic seed germination, compared to the commonly used GR24. MP16 was the most outstanding analog showing high activity in different SL biological functions. In summary, our new analogs series contains very promising candidates for different applications, which include the usage in studies for understanding different aspects of SL biology as well as large scale field application for combating root parasitic weeds, such as Striga hermonthica that devastates cereal yields in sub-Saharan Africa.

We are thankful to Dr. Binne Zwanenburg, Radboud University, the Netherlands for providing GR24. We are grateful to Dr. Junko Kyozuka, Tohoku University, Japan for providing d mutant rice seeds and Dr. Abdel Gabar Babiker, The National Research Center, Sudan for providing S. hermonthica seeds. We are thankful to Prof. Mohamed Ewis Abdelaziz, Cairo University, Egypt for seeds of P. aegyptiaca and to Dr. Jonne Rodenburg, Africa Rice, Tanzania for providing seeds of rice cv IAC-165. Funding. This study was supported by the Bill & Melinda Gates Foundation grant OPP1136424 and the King Abdullah University of Science and Technology (KAUST). Moreover, this study was also partially funded by the Core Research for Evolutional Science and Technology (CREST) Program and the SATREPS Program of the Japan Science and Technology Agency (JST) (to TA) and JSPS Grant-in-Aid for Scientific Research (Grant No. 18H03939 to TA).

Except where otherwise noted, this item's license is described as Archived with thanks to Frontiers in Plant Science