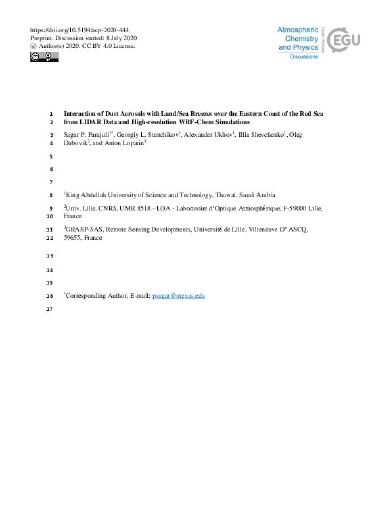 With advances in modeling approaches and the application of satellite and ground-based data in dust-related research, our understanding of the dust cycle has significantly improved in recent decades. However, two aspects of the dust cycle, namely the vertical profiles and diurnal cycles, are not yet adequately understood, mainly due to the sparsity of direct observations. Measurements of backscattering caused by atmospheric aerosols have been ongoing since 2014 at the King Abdullah University of Science and Technology (KAUST) campus using a micro-pulse LIDAR with a high temporal resolution. KAUST is located on the east coast of the Red Sea (22.3° N, 39.1° E), and currently hosts the only operating LIDAR system in the Arabian Peninsula. We use the data from this LIDAR together with other collocated observations and high-resolution WRF-Chem model simulations to study the following aspects of aerosols, with a focus on dust over the Red Sea Arabian coastal plains. Firstly, we investigate the vertical profiles of aerosol extinction and concentration in terms of their seasonal and diurnal variability. Secondly, we evaluate how well the WRF-Chem model performs in representing the vertical distribution of aerosols over the study site. Thirdly, we explore the interactions between dust aerosols and land/sea breezes, which are the most influential components of the local diurnal circulation in the region. We found a substantial variation in the vertical profile of aerosols in different seasons. We also discovered a marked difference in the daytime and nighttime vertical distribution of aerosols at the study site, as revealed by the LIDAR data. The LIDAR data also identified a prominent dust layer at ∼5–7 km during the nighttime, which represented the long-range transported dust brought to the site by the easterly flow from remote inland deserts. The vertical profiles of aerosol extinction in different seasons were largely consistent between the LIDAR, MERRA-2 reanalysis, and CALIOP data, as well as in the WRF-Chem simulations. The sea breeze circulation was much deeper (∼2 km) than the land breeze circulation (∼1 km), but both breeze systems prominently affected the distribution of dust aerosols over the study site. We observed that sea breezes push the dust aerosols upwards along the western slope of the Sarawat Mountains, which eventually collide with the dust-laden northeasterly trade winds coming from nearby inland deserts, causing elevated dust maxima at a height of ∼1.5 km above sea level over the mountains. Moreover, the sea and land breezes intensified dust emissions from the coastal region during the daytime and nighttime, respectively. The WRF-Chem model successfully captured the onset, demise, and height of a large-scale dust event that occurred in 2015, compared to LIDAR data. Our study, although focused on a particular region, has broader environmental implications as it highlights how aerosols and dust emissions from the coastal plains can affect the Red Sea climate and marine habitats.

The research reported in this publication was supported by funding from King Abdullah University of Science and Technology (KAUST). We thank the KAUST Supercomputing Laboratory for providing computing resources. We also thank Anatolii Anisimov for providing SEVIRI images and for helpful discussions. We are grateful to Ellsworth Judd Welton of NASA Goddard Space Flight Center for the help in archiving and processing the raw LIDAR data. Thanks are also due to Michael Cusack of KAUST for proofreading the manuscript.

Except where otherwise noted, this item's license is described as © Author(s) 2020. This work is distributed under the Creative Commons Attribution 4.0 License.