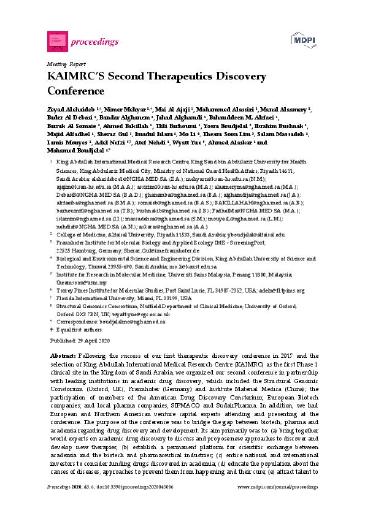 Following the success of our first therapeutic discovery conference in 2017 and the selection of King Abdullah International Medical Research Centre (KAIMRC) as the first Phase 1 clinical site in the Kingdom of Saudi Arabia, we organized our second conference in partnership with leading institutions in academic drug discovery, which included the Structural Genomic Constorium (Oxford, UK), Fraunhofer (Germany) and Institute Material Medica (China); the participation of members of the American Drug Discovery Consterium; European Biotech companies; and local pharma companies, SIPMACO and SudairPharma. In addition, we had European and Northern American venture capital experts attending and presenting at the conference. The purpose of the conference was to bridge the gap between biotech, pharma and academia regarding drug discovery and development. Its aim primarily was to: (a) bring together world experts on academic drug discovery to discuss and propose new approaches to discover and develop new therapies; (b) establish a permanent platform for scientific exchange between academia and the biotech and pharmaceutical industries; (c) entice national and international investors to consider funding drugs discovered in academia; (d) educate the population about the causes of diseases, approaches to prevent them from happening and their cure; (e) attract talent to consider the drug discovery track for their studies and career. During the conference, we discussed the unique academic drug discovery disrupting business models, which can make their discoveries easily accessible in an open source mode. This unique model accelerates the dissemination of knowledge to all world scientists to guide them in their research. This model is aimed at bringing effective and affordable medicine to all mankind in a very short time. Moreover, the program discussed rare disease targets, orphan drug discovery, immunotherapy discovery and process, the role of bioinformatics in drug discovery, anti-infective drug discovery in the era of bad bugs, natural products as a source of novel drugs and innovative drug formulation and delivery. Additionally, as the conference was organized during the surge of the epidemic, we dedicated the first day (25 February) to coronavirus science, detection and therapy. The day was co-organized with the King Saud bin Abdulaziz University for Health Sciences, Kingdom of Saudi Arabia(KSA) Ministry of Education to announce the grant winner for infectious diseases. Simultaneously, intensive courses were delivered to junior scientists on the principle of drug discovery, immunology and clinical trials, as well as rare diseases. The second therapeutics discovery forum provided a platform for interactive knowledge sharing and the convergence of researchers, governments, pharmaceuticals, biopharmaceuticals, hospitals and non-profit organizations on the topic of academic drug discovery. The event presented showcases on global drug discovery initiatives and demonstrated how collaborations are leading to successful new therapies. In line with the KSA 2030 vision on becoming world leaders with an innovative economy and healthy population, therapeutic discovery is becoming an area of interest to science leaders in the kingdom, and our conference gave us the opportunity to identity key areas of interest as well as potential future collaborations.

Except where otherwise noted, this item's license is described as Archived with thanks to Proceedings