Towards a rigorous species delimitation framework for scleractinian corals based on RAD sequencing: the case study of Leptastrea from the Indo-Pacific 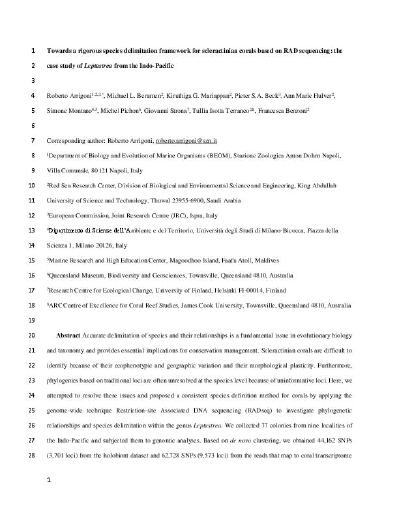 Accurate delimitation of species and their relationships is a fundamental issue in evolutionary biology and taxonomy and provides essential implications for conservation management. Scleractinian corals are difficult to identify because of their ecophenotypic and geographic variation and their morphological plasticity. Furthermore, phylogenies based on traditional loci are often unresolved at the species level because of uninformative loci. Here, we attempted to resolve these issues and proposed a consistent species definition method for corals by applying the genome-wide technique Restriction-site Associated DNA sequencing (RADseq) to investigate phylogenetic relationships and species delimitation within the genus Leptastrea. We collected 77 colonies from nine localities of the Indo-Pacific and subjected them to genomic analyses. Based on de novo clustering, we obtained 44,162 SNPs (3701 loci) from the holobiont dataset and 62,728 SNPs (9573 loci) from the reads that map to coral transcriptome to reconstruct a robust phylogenetic hypothesis of the genus. Moreover, nearly complete mitochondrial genomes and ribosomal DNA arrays were retrieved by reference mapping. We combined concatenation-based phylogenetic analyses with coalescent-based species tree and species delimitation methods. Phylogenies suggest the presence of six distinct species, three corresponding to known taxa, namely Leptastrea bottae, Leptastrea inaequalis, Leptastrea transversa, one characterized by a remarkable skeletal variability encompassing the typical morphologies of Leptastrea purpurea and Leptastrea pruinosa, and two distinct and currently undescribed species. Therefore, based on the combination of genomic, morphological, morphometric, and distributional data, we herein described Leptastrea gibbosa sp. n. from the Pacific Ocean and Leptastrea magaloni sp. n. from the southwestern Indian Ocean and formally considered L. pruinosa as a junior synonym of L. purpurea. Notably, mitogenomes and rDNA yielded a concordant yet less resolved phylogeny reconstruction compared to the ones based on SNPs. This aspect demonstrates the strength and utility of RADseq technology for disentangling species boundaries in closely related species and in a challenging group such as scleractinian corals.

This project was supported by funding from KAUST (award # FCC/1/1973-21 and baseline research funds to MLB). This research was undertaken in accordance with the policies and procedures of KAUST. Permissions relevant for KAUST to undertake the research have been obtained from the applicable governmental agencies in the Kingdom of Saudi Arabia. We wish to thank A Gusti (KAUST), the captain and crew of the MV Dream-Master, and the KAUST Coastal and Marine Resources Core Laboratory for fieldwork logistics in the Red Sea. In Yemen, fieldwork organization, logistics, and sampling permits from the relevant authorities were possible thanks to the collaboration of E Dutrieux (Creocean), CH Chaineau (Total SA), R Hirst, and M Abdul Aziz (YLNG). We are grateful to E Karsenti (EMBL) and E Bougois (Tara Expeditions), the OCEANS Consortium for allowing sampling during the Tara Oceans expedition in Djibouti, the Gambier Archipelago, French Polynesia, and Mayotte. We thank the commitment of the following people and additional sponsors who made this singular expedition possible: CNRS, EMBL, Genoscope/CEA, VIB, Stazione Zoologica Anton Dohrn, UNIMIB, ANR (projects POSEIDON/ANR-09-BLAN-0348, BIOMARKS/ANR-08-BDVA-003, PROMETHEUS/ANR-09-GENM-031, and TARA-GIRUS/ANR-09-PCS-GENM-218), EU FP7 (MicroB3/No.287589), FWO, BIO5, Biosphere 2, agnès b., the Veolia Environment Foundation, Region Bretagne, World Courier, Illumina, Cap L’Orient, the EDF Foundation EDF Diversiterre, FRB, the Prince Albert II de Monaco Foundation, Etienne Bourgois, the Tara schooner, and its captain and crew. Tara Oceans would not exist without continuous support from 23 institutes (https://oceans.taraexpeditions.org). This article is contribution number 103 of the Tara Oceans Expedition 2009–2012. New Caledonia data and specimens were obtained during the IRD CORALCAL1 (https://dx.doi.org/10.17600/7100020), CORALCAL2 (https://dx.doi.org/10.17600/8100050), CORALCAL3 (https://dx.doi.org/10.17600/9100010), CORALCAL4 (https://dx.doi.org/10.17600/12100060), BIBELOT (https://dx.doi.org/10.17600/14003700), and CORALCAL5 (https://dx.doi.org/10.17600/15004300) expeditions on the RV Alis. We are grateful to the chief scientists and cruise organizers C Payri (IRD), C Fauvelot (IRD) for invitation and financial support to join and valuable help with sampling authorizations. Material from Madagascar was collected during the MAD (https://dx.doi.org/10.17600/16004700) expedition on the RV Antea organized by H Magalon (ULR). The MADANG expedition specimens were obtained during the "Our Planet Reviewed" Papua Niugini expedition (https://dx.doi.org/10.17600/12100070) organized by Muséum National d'Histoire Naturelle (MNHN), Pro Natura International (PNI), Institut de Recherche pour le Développement (IRD), and University of Papua New Guinea (UPNG), Principal Investigators P Bouchet, C Payri, and S Samadi. The organizers acknowledge funding from the Total Foundation, Prince Albert II of Monaco Foundation, Fondation EDF, Stavros Niarchos Foundation, and Entrepose Contracting, and in-kind support from the Divine Word University (DWU). Material from Kavieng, PNG, was sampled during the KAVIENG Expedition (https://doi.org/10.17600/14004400). The expedition operated under a permit delivered by the Papua New Guinea Department of Environment and Conservation. Material from the Coral Sea, Australia, was sampled in under Permit No. AU-COM2018-437. The authors wish to thank A.H. Baird (JCU), M. Pratchett (JCU), and Hugo Harrison (JCU), and the relevant staff at Parks Australia, for material collected in the Coral Sea. We are grateful to A. Andouche (MNHN), M. Castellin (MNHN), P. Lozouet (MNHN), C. Lüter (ZMB), T. Bridge (MTQ), P. Muir (MTQ), M. Lowe (NHM), and A. Cabrinovic (NHM) for allowing the study of the museum reference collections. The views expressed are purely those of the writers and may not in any circumstance be regarded as stating an official position of the European Commission, nor of Parks Australia, the Director of National Parks or the Australian Government. We are grateful to Z.H. Forsman (UH Manoa) and one anonymous reviewer for their useful corrections and suggestions.