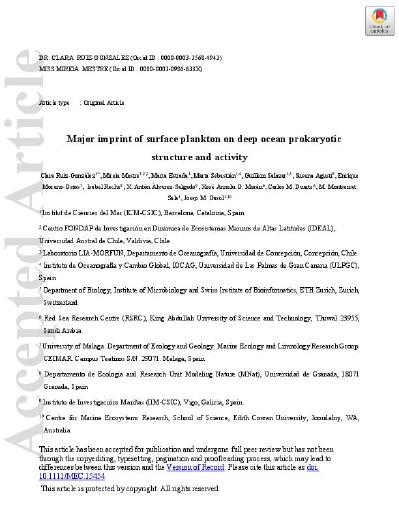 Deep ocean microbial communities rely on the organic carbon produced in the sunlit ocean, yet it remains unknown whether surface processes determine the assembly and function of bathypelagic prokaryotes to a larger extent than deep-sea physico-chemical conditions. Here, we explored whether variations in surface phytoplankton assemblages across Atlantic, Pacific and Indian ocean stations can explain structural changes in bathypelagic (ca. 4000 m) free-living and particle-attached prokaryotic communities (characterized through 16S rRNA gene sequencing), as well as in prokaryotic activity and dissolved organic matter (DOM) quality. We show that the spatial structuring of prokaryotic communities in the bathypelagic strongly followed variations in the abundances of surface dinoflagellates and ciliates, as well as gradients in surface primary productivity, but were less influenced by bathypelagic physico-chemical conditions. Amino acid-like DOM components in the bathypelagic reflected variations of those components in surface waters, and seemed to control bathypelagic prokaryotic activity. The imprint of surface conditions was more evident in bathypelagic than in shallower mesopelagic (200-1000 m) communities, suggesting a direct connectivity through fast-sinking particles that escapes mesopelagic transformations. Finally, we identified a pool of endemic deep-sea prokaryotic taxa (including potential chemoautotrophic groups) that appear less connected to surface processes than those bathypelagic taxa with a widespread vertical distribution. Our results suggest that surface planktonic communities shape the spatial structure of the bathypelagic microbiome to a larger extent than the local physico-chemical environment, likely through determining the nature of the sinking particles and the associated prokaryotes reaching bathypelagic waters.