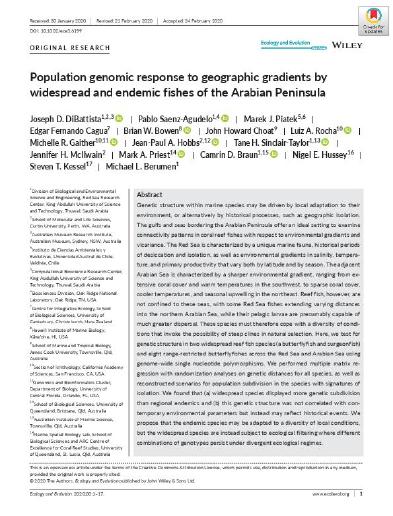 Genetic structure within marine species may be driven by local adaptation to their environment, or alternatively by historical processes, such as geographic isolation. The gulfs and seas bordering the Arabian Peninsula offer an ideal setting to examine connectivity patterns in coral reef fishes with respect to environmental gradients and vicariance. The Red Sea is characterized by a unique marine fauna, historical periods of desiccation and isolation, as well as environmental gradients in salinity, temperature, and primary productivity that vary both by latitude and by season. The adjacent Arabian Sea is characterized by a sharper environmental gradient, ranging from extensive coral cover and warm temperatures in the southwest, to sparse coral cover, cooler temperatures, and seasonal upwelling in the northeast. Reef fish, however, are not confined to these seas, with some Red Sea fishes extending varying distances into the northern Arabian Sea, while their pelagic larvae are presumably capable of much greater dispersal. These species must therefore cope with a diversity of conditions that invoke the possibility of steep clines in natural selection. Here, we test for genetic structure in two widespread reef fish species (a butterflyfish and surgeonfish) and eight range-restricted butterflyfishes across the Red Sea and Arabian Sea using genome-wide single nucleotide polymorphisms. We performed multiple matrix regression with randomization analyses on genetic distances for all species, as well as reconstructed scenarios for population subdivision in the species with signatures of isolation. We found that (a) widespread species displayed more genetic subdivision than regional endemics and (b) this genetic structure was not correlated with contemporary environmental parameters but instead may reflect historical events. We propose that the endemic species may be adapted to a diversity of local conditions, but the widespread species are instead subject to ecological filtering where different combinations of genotypes persist under divergent ecological regimes.

This research was supported by the KAUST Office of Competitive Research Funds (OCRF) under Award No. CRG-1-2012-BER-002 and baseline research funds to M.L.B., a National Geographic Society Grant 9024-11 to J.D.D., a National Science Foundation grant OCE-1558852 to B.W.B., California Academy of Sciences funding to L.A.R, and Australian Research Council funding to J.-P.A.H. (DE200101286). For support in Socotra, we kindly thank the Ministry of Water and Environment of Yemen, staff at the Environment Protection Authority (EPA) Socotra, and especially Salah Saeed Ahmed, Fouad Naseeb and Thabet Abdullah Khamis, as well as Ahmed Issa Ali Affrar from Socotra Specialist Tour for handling general logistics. For logistic support elsewhere, we thank Eric Mason at Dream Divers in Saudi Arabia; the Red Sea State Government and The Red Sea University in Sudan, as well as Equipe Cousteau support for the Sudan Shark and Ray Conservation and Management Program including C. Scarpellini and M. Younis; Nicolas Prévot at Dolphin Divers and the crew of the M/V Deli in Djibouti; the KAUST Coastal and Marine Resources Core Lab and Amr Gusti; and the Ministry of Agriculture and Fisheries in Oman including Abdul Karim. For specimen collections, we thank Tilman Alpermann, Giacomo Bernardi, Richard Coleman, Gerrit Nanninga, and members of the Reef Ecology Lab at KAUST. For assistance with bench work at KAUST, we thank Craig Michell. We also acknowledge important contributions from the KAUST Bioscience Core Laboratory with Sivakumar Neelamegam and Hicham Mansour for their assistance with Illumina sequencing. Thanks to Robert Toonen and Stephen Karl for discussions and critiques that improved this manuscript.