Water Pass: The Aquaporin ZmPIP2:5 Contributes to Water Transport at the Gatekeeper Cells. 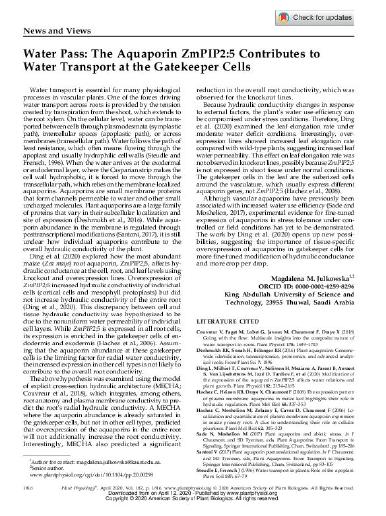 Water transport is essential for many physiological processes in vascular plants. One of the forces driving water transport across roots is provided by the tension created by transpiration from the shoot, which extends to the root xylem. On the cellular level, water can be transported between cells through plasmodesmata (symplastic path), intercellular spaces (apoplastic path), or across membranes (transcellular path). Water follows the path of least resistance, which often means flowing through the apoplast and usually hydrophilic cell walls (Steudle and Frensch, 1996). When the water arrives at the exodermal or endodermal layer, where the Casparian strip makes the cell wall hydrophobic, it is forced to move through the transcellular path, which relies on the membrane-localized aquaporins. Aquaporins are small membrane proteins that form channels permeable to water and other small uncharged molecules. Plant aquaporins are a large family of proteins that vary in their subcellular localization and site of expression (Deshmukh et al., 2016). While aquaporin abundance in the membrane is regulated through posttranscriptional modifications (Santoni, 2017), it is still unclear how individual aquaporins contribute to the overall hydraulic conductivity of the plant. Ding et al. (2020) explored how the most abundant maize (Zea mays) root aquaporin, ZmPIP2;5, affects hydraulic conductance at the cell, root, and leaf levels using knockout and overexpression lines. Overexpression of ZmPIP2;5 increased hydraulic conductivity of individual cells (cortical cells and mesophyll protoplasts) but did not increase hydraulic conductivity of the entire root (Ding et al., 2020). This discrepancy between cell and tissue hydraulic conductivity was hypothesized to be due to the nonuniform water permeability of individual cell layers. While ZmPIP2;5 is expressed in all root cells, its expression is enriched in the gatekeeper cells of endodermis and exodermis (Hachez et al., 2006). Assuming that the aquaporin abundance at these gatekeeper cells is the limiting factor for radial water conductivity, the increased expression in other cell types is not likely to contribute to the overall root conductivity. The above hypothesis was examined using the model of explicit cross-section hydraulic architecture (MECHA; Couvreur et al., 2018), which integrates, among others, root anatomy and plasma membrane conductivity to predict the root’s radial hydraulic conductivity. A MECHA where the aquaporin abundance is already saturated in the gatekeeper cells, but not in other cell types, predicted that overexpression of the aquaporins in the entire root will not additionally increase the root conductivity. Interestingly, MECHA also predicted a significant reduction in the overall root conductivity, which was observed for the knockout lines. Because hydraulic conductivity changes in response to external factors, the plant’s water use efficiency can be compromised under stress conditions. Therefore, Ding et al. (2020) examined the leaf elongation rate under moderate water deficit conditions. Interestingly, overexpression lines showed increased leaf elongation rate compared with wild-type plants, suggesting increased leaf water permeability. This effect on leaf elongation rate was not observed in knockout lines, possibly because ZmPIP2;5 is not expressed in shoot tissue under normal conditions. The gatekeeper cells in the leaf are the suberized cells around the vasculature, which usually express different aquaporin genes, not ZmPIP2;5 (Hachez et al., 2008). Although vascular aquaporins have previously been associated with increased water use efficiency (Sade and Moshelion, 2017), experimental evidence for fine-tuned expression of aquaporins in stress tolerance under controlled or field conditions has yet to be demonstrated. The work by Ding et al. (2020) opens up new possibilities, suggesting the importance of tissue-specific overexpression of aquaporins in gatekeeper cells for more fine-tuned modification of hydraulic conductance and more crop per drop.