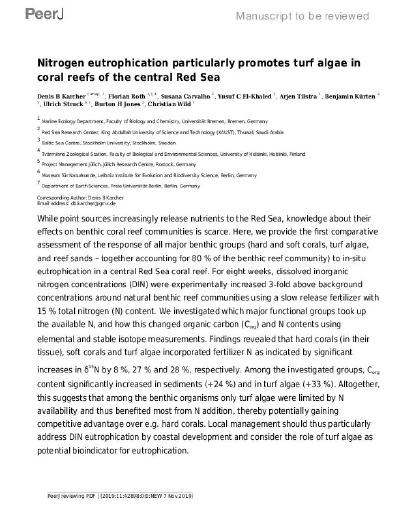 While various sources increasingly release nutrients to the Red Sea, knowledge about their effects on benthic coral reef communities is scarce. Here, we provide the first comparative assessment of the response of all major benthic groups (hard and soft corals, turf algae and reef sands—together accounting for 80% of the benthic reef community) to in-situ eutrophication in a central Red Sea coral reef. For 8 weeks, dissolved inorganic nitrogen (DIN) concentrations were experimentally increased 3-fold above environmental background concentrations around natural benthic reef communities using a slow release fertilizer with 15% total nitrogen (N) content. We investigated which major functional groups took up the available N, and how this changed organic carbon (Corg) and N contents using elemental and stable isotope measurements. Findings revealed that hard corals (in their tissue), soft corals and turf algae incorporated fertilizer N as indicated by significant increases in δ$^{15}$N by 8%, 27% and 28%, respectively. Among the investigated groups, Corg content significantly increased in sediments (+24%) and in turf algae (+33%). Altogether, this suggests that among the benthic organisms only turf algae were limited by N availability and thus benefited most from N addition. Thereby, based on higher Corg content, turf algae potentially gained competitive advantage over, for example, hard corals. Local management should, thus, particularly address DIN eutrophication by coastal development and consider the role of turf algae as potential bioindicator for eutrophication.

We are thankful to Marianne Falk for helping in elemental-and isotopic analysis and Nils Rädecker for coral sample processing advice. We were happy to get further support by Pedro Ruiz-Compean (sediment samples), Aislinn Dunne (sediment samples), Sophia Tobler (image editing), Rodrigo Villalobos and João Cúrdia (both field work).
This research was supported by DFG grant Wi 2677/9-1 to Christian Wild, KAUST baseline funding to Burton H. Jones and the KAUST VSRP program to Denis B. Karcher. Susana Carvalho is funded by the Saudi Aramco-KAUST Center for Marine Environmental Observations. The funders had no role in study design, data collection and analysis, decision to publish, or preparation of the manuscript.