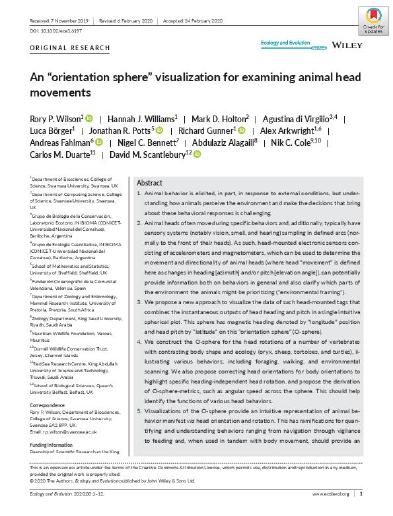 Animal behavior is elicited, in part, in response to external conditions, but understanding how animals perceive the environment and make the decisions that bring about these behavioral responses is challenging. Animal heads often move during specific behaviors and, additionally, typically have sensory systems (notably vision, smell, and hearing) sampling in defined arcs (normally to the front of their heads). As such, head-mounted electronic sensors consisting of accelerometers and magnetometers, which can be used to determine the movement and directionality of animal heads (where head “movement” is defined here as changes in heading [azimuth] and/or pitch [elevation angle]), can potentially provide information both on behaviors in general and also clarify which parts of the environment the animals might be prioritizing (“environmental framing”). We propose a new approach to visualize the data of such head-mounted tags that combines the instantaneous outputs of head heading and pitch in a single intuitive spherical plot. This sphere has magnetic heading denoted by “longitude” position and head pitch by “latitude” on this “orientation sphere” (O-sphere). We construct the O-sphere for the head rotations of a number of vertebrates with contrasting body shape and ecology (oryx, sheep, tortoises, and turtles), illustrating various behaviors, including foraging, walking, and environmental scanning. We also propose correcting head orientations for body orientations to highlight specific heading-independent head rotation, and propose the derivation of O-sphere-metrics, such as angular speed across the sphere. This should help identify the functions of various head behaviors. Visualizations of the O-sphere provide an intuitive representation of animal behavior manifest via head orientation and rotation. This has ramifications for quantifying and understanding behaviors ranging from navigation through vigilance to feeding and, when used in tandem with body movement, should provide an important link between perception of the environment and response to it in free-ranging animals.

This study was financially supported by the Deanship of Scientific Research at the King Saud University through the Vice Deanship of Research Chairs, the National Geographic Global Exploration Fund (#GEFNE89-13), the Royal Society (2009/R3 JP090604), NERC (NE/I002030/1) (SMS), NERC (NE/R001669/1) (JRP) and the Royal Society/Wolfson Lab refurbishment scheme (RPW). This research also contributes to the CAASE project funded by King Abdullah University of Science and Technology (KAUST) under the KAUST Sensor Initiative. Ethical approval for the work on oryx was obtained from the University of the Witwatersrand Animal Ethics Committee (2014/53/D). Permission to work in the field was granted by the President of the Saudi Wildlife Authority. Permission to work with loggerhead turtles under rehabilitation at ARCA del Mar was approved by the Oceanogràfic Animal Care & Welfare Committee (OCE-16-18). We thank the Beveridge Herpetological Trust, Durrell Wildlife Conservation Trust, College of Science (Swansea University) and Mauritian Wildlife Foundation for funding and support of the tortoise data, and Mauritian Wildlife Foundation for the organizing and supporting the field work. Permits and ethical guidelines were provided by the Durrell Wildlife Conservation Trust, Mauritian Wildlife Foundation, National Parks and Conservation Service, and the College of Science, Swansea University. Permission to access Île aux Aigrettes was granted by Mauritian Wildlife Foundation. We thank The Nature Conservancy for allowing the sheep work in Patagonia. Hannah Williams is supported by the European Research Council under the European Union's Horizon 2020 research and innovation program Grant 715874 (to E. L. C. Shepard).