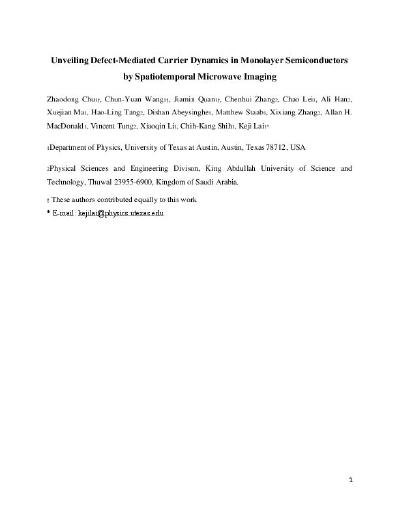 The optoelectronic properties of atomically thin transition-metal dichalcogenides are strongly correlated with the presence of defects in the materials, which are not necessarily detrimental for certain applications. For instance, defects can lead to an enhanced photoconduction, a complicated process involving charge generation and recombination in the time domain and carrier transport in the spatial domain. Here, we report the simultaneous spatial and temporal photoconductivity imaging in two types of WS2 monolayers by laser-illuminated microwave impedance microscopy. The diffusion length and carrier lifetime were directly extracted from the spatial profile and temporal relaxation of microwave signals, respectively. Time-resolved experiments indicate that the critical process for photoexcited carriers is the escape of holes from trap states, which prolongs the apparent lifetime of mobile electrons in the conduction band. As a result, counterintuitively, the long-lived photoconductivity signal is higher in chemical-vapor deposited (CVD) samples than exfoliated monolayers due to the presence of traps that inhibits recombination. Our work reveals the intrinsic time and length scales of electrical response to photoexcitation in van der Waals materials, which is essential for their applications in optoelectronic devices.

The research at The University of Texas at Austin (UT-Austin), performed collaboratively between K.L., C.-K.S., X.L., and A.H.M., was primarily supported by the NSF through the Center for Dynamics and Control of Materials, an NSF Materials Research Science and Engineering Center (MRSEC) under Cooperative Agreement DMR-1720595. The authors also acknowledge the use of facilities and instrumentation supported by the NSF MRSEC. K.L., C.-K.S., and X.L. were also supported by NSF Award EFMA 1542747. The iMIM instrumentation was supported by the US Army Research Laboratory and the US Army Research Office under Grants W911NF-16-1- 0276 and W911NF-17-1-0190. K.L. and Z.C. acknowledge the support from Welch Foundation Grant F-1814. X.L. acknowledges the support from Welch Foundation Grant F-1662. J.Q. acknowledges the support from the Department of Energy, Basic Energy Science Grant DE-SC0019398 and a catalysis grant from the UT-Austin. C.Z. and X.Z. acknowledge the financial support from King Abdullah University of Science and Technology , Office of Sponsored Research under Award CRF-2016-2996-CRG5. V.T. gratefully acknowledges the research award from the Doctoral New Investigator Award from American Chemical Society (ACS) Petroleum Fund (Award ACS PRF 54717-DNI10). Part of the characterization and synthesis of 2D TMDs in this work was performed as User Proposals (5067 and 5424) at the Molecular Foundry, Lawrence Berkeley National Laboratory, supported by the Office of Basic Energy Sciences, of the US Department of Energy under Contract DEAC02-05CH11231.