Seasonal variability and vertical distribution of autotrophic and heterotrophic picoplankton in the Central Red Sea. 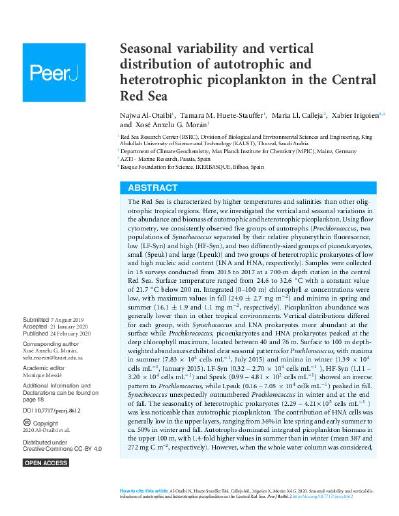 The Red Sea is characterized by higher temperatures and salinities than other oligotrophic tropical regions. Here, we investigated the vertical and seasonal variations in the abundance and biomass of autotrophic and heterotrophic picoplankton. Using flow cytometry, we consistently observed five groups of autotrophs (Prochlorococcus, two populations of Synechococcus separated by their relative phycoerythrin fluorescence, low (LF-Syn) and high (HF-Syn), and two differently-sized groups of picoeukaryotes, small (Speuk) and large (Lpeuk)) and two groups of heterotrophic prokaryotes of low and high nucleic acid content (LNA and HNA, respectively). Samples were collected in 15 surveys conducted from 2015 to 2017 at a 700-m depth station in the central Red Sea. Surface temperature ranged from 24.6 to 32.6 °C with a constant value of 21.7 °C below 200 m. Integrated (0-100 m) chlorophyll a concentrations were low, with maximum values in fall (24.0 ± 2.7 mg m-2) and minima in spring and summer (16.1 ± 1.9 and 1.1 mg m-2, respectively). Picoplankton abundance was generally lower than in other tropical environments. Vertical distributions differed for each group, with Synechococcus and LNA prokaryotes more abundant at the surface while Prochlorococcus, picoeukaryotes and HNA prokaryotes peaked at the deep chlorophyll maximum, located between 40 and 76 m. Surface to 100 m depth-weighted abundances exhibited clear seasonal patterns for Prochlorococcus, with maxima in summer (7.83 × 104 cells mL-1, July 2015) and minima in winter (1.39 × 104 cells mL-1, January 2015). LF-Syn (0.32 - 2.70 × 104 cells mL-1 ), HF-Syn (1.11 - 3.20 × 104 cells mL-1) and Speuk (0.99 - 4.81 × 102 cells mL-1) showed an inverse pattern to Prochlorococcus, while Lpeuk (0.16 - 7.05 × 104 cells mL-1) peaked in fall. Synechococcus unexpectedly outnumbered Prochlorococcus in winter and at the end of fall. The seasonality of heterotrophic prokaryotes (2.29 - 4.21×105 cells mL-1 ) was less noticeable than autotrophic picoplankton. The contribution of HNA cells was generally low in the upper layers, ranging from 36% in late spring and early summer to ca. 50% in winter and fall. Autotrophs dominated integrated picoplankton biomass in the upper 100 m, with 1.4-fold higher values in summer than in winter (mean 387 and 272 mg C m-2, respectively). However, when the whole water column was considered, the biomass of heterotrophic prokaryotes exceeded that of autotrophic picoplankton with an average of 411 mg C m-2. Despite being located in tropical waters, our results show that the picoplankton community seasonal differences in the central Red Sea are not fundamentally different from higher latitude regions.

We gratefully acknowledge the crew of the RVs Thuwal and KAUST Explorer and all the personnel from the Coastal and Marine Resources Core Lab for their diligent field-work assistance. Miguel Viegas aided enormously with fieldwork and sample collection, and he was also responsible for chlorophyll analysis.
This research was supported by King Abdullah University for Science and Technology through the baseline funding (BAS/1/1069-01-01) provided to Xosé Anxelu G. Morán. The funders had no role in study design, data collection and analysis, decision to publish, or preparation of the manuscript.

Except where otherwise noted, this item's license is described as Archived with thanks to PeerJ