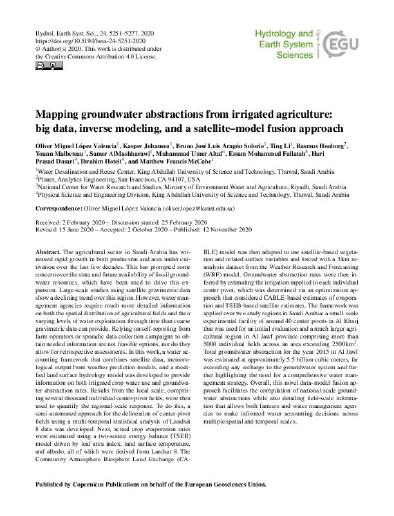 Abstract. The agricultural sector in Saudi Arabia has witnessed rapid growth in both production and area under cultivation over the last few decades. This has prompted some concern over the state and future availability of fossil groundwater resources, which have been used to drive this expansion. Large-scale studies using satellite gravimetric data show a declining trend over this region. However, water management agencies require much more detailed information on both the spatial distribution of agricultural fields and their varying levels of water exploitation through time than coarse gravimetric data can provide. Relying on self-reporting from farm operators or sporadic data collection campaigns to obtain needed information are not feasible options, nor do they allow for retrospective assessments. In this work, a water accounting framework that combines satellite data, meteorological output from weather prediction models, and a modified land surface hydrology model was developed to provide information on both irrigated crop water use and groundwater abstraction rates. Results from the local scale, comprising several thousand individual center-pivot fields, were then used to quantify the regional-scale response. To do this, a semi-automated approach for the delineation of center-pivot fields using a multi-temporal statistical analysis of Landsat 8 data was developed. Next, actual crop evaporation rates were estimated using a two-source energy balance (TSEB) model driven by leaf area index, land surface temperature, and albedo, all of which were derived from Landsat 8. The Community Atmosphere Biosphere Land Exchange (CABLE) model was then adapted to use satellite-based vegetation and related surface variables and forced with a 3 km reanalysis dataset from the Weather Research and Forecasting (WRF) model. Groundwater abstraction rates were then inferred by estimating the irrigation supplied to each individual center pivot, which was determined via an optimization approach that considered CABLE-based estimates of evaporation and TSEB-based satellite estimates. The framework was applied over two study regions in Saudi Arabia: a small-scale experimental facility of around 40 center pivots in Al Kharj that was used for an initial evaluation and a much larger agricultural region in Al Jawf province comprising more than 5000 individual fields across an area exceeding 2500 km2. Total groundwater abstraction for the year 2015 in Al Jawf was estimated at approximately 5.5 billion cubic meters, far exceeding any recharge to the groundwater system and further highlighting the need for a comprehensive water management strategy. Overall, this novel data–model fusion approach facilitates the compilation of national-scale groundwater abstractions while also detailing field-scale information that allows both farmers and water management agencies to make informed water accounting decisions across multiple spatial and temporal scales.

The authors would like to acknowledge the collaboration with the Saudi Arabian Ministry of Environment, Water and Agriculture, particularly Abdulaziz AlShaibani, Abdulaziz M. AlBassam, Arif Alkalali and Mohammad AlSaud. We also thank Alan King at Tawdeehiya farms for providing access and logistical support, as well as for the data used for validating irrigation estimates. Finally, we would like to thank the editor and the two anonymous referees for their suggestions that contributed to the improvement of this paper.
Research reported in this publication was supported by the King Abdullah University of Science and Technology (KAUST).