Toward a Coordinated Global Observing System for Seagrasses and Marine Macroalgae 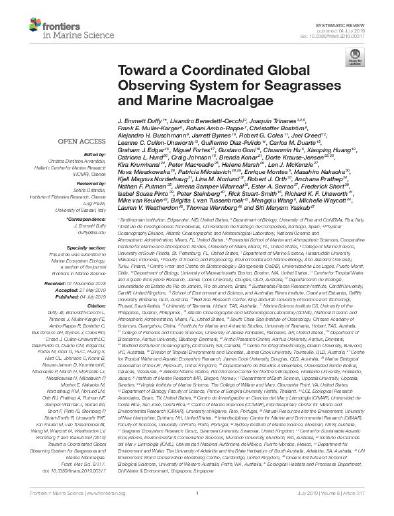 In coastal waters around the world, the dominant primary producers are benthic macrophytes, including seagrasses and macroalgae, that provide habitat structure and food for diverse and abundant biological communities and drive ecosystem processes. Seagrass meadows and macroalgal forests play key roles for coastal societies, contributing to fishery yields, storm protection, biogeochemical cycling and storage, and important cultural values. These socio-economically valuable services are threatened worldwide by human activities, with substantial areas of seagrass and macroalgal forests lost over the last half-century. Tracking the status and trends in marine macrophyte cover and quality is an emerging priority for ocean and coastal management, but doing so has been challenged by limited coordination across the numerous efforts to monitor macrophytes, which vary widely in goals, methodologies, scales, capacity, governance approaches, and data availability. Here, we present a consensus assessment and recommendations on the current state of and opportunities for advancing global marine macrophyte observations, integrating contributions from a community of researchers with broad geographic and disciplinary expertise. With the increasing scale of human impacts, the time is ripe to harmonize marine macrophyte observations by building on existing networks and identifying a core set of common metrics and approaches in sampling design, field measurements, governance, capacity building, and data management. We recommend a tiered observation system, with improvement of remote sensing and remote underwater imaging to expand capacity to capture broad-scale extent at intervals of several years, coordinated with stratified in situ sampling annually to characterize the key variables of cover and taxonomic or functional group composition, and to provide ground-truth. A robust networked system of macrophyte observations will be facilitated by establishing best practices, including standard protocols, documentation, and sharing of resources at all stages of workflow, and secure archiving of open-access data. Because such a network is necessarily distributed, sustaining it depends on close engagement of local stakeholders and focusing on building and long-term maintenance of local capacity, particularly in the developing world. Realizing these recommendations will produce more effective, efficient, and responsive observing, a more accurate global picture of change in vegetated coastal systems, and stronger international capacity for sustaining observations.

Except where otherwise noted, this item's license is described as Archived with thanks to Frontiers in Marine Science