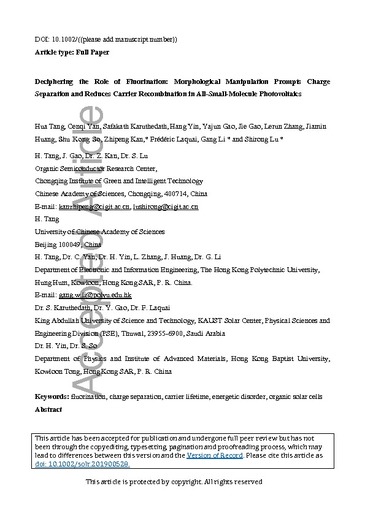 Fluorination has proven effective in increasing the absorption, downshifting the energy levels, and enhancing the crystallinity of high-performance fused-ring electron acceptors (FREAs). However, an in-depth understanding of the effects of fluorination is still lacking, as research efforts have mainly focused on increasing the power conversion efficiency (PCE). In addition, fluorination on FREAs has rarely been reported in all-small-molecule organic solar cells (ASM OSCs). Herein, fluorination on FREAs is systematically studied in ASM OSCs using the popular FREA 2,2′-((2Z,2′Z)-((4,4,9,9-tetrahexyl-4,9-dihydro-s-indaceno[1,2-b:5,6-b′]dithiophene-2,7-diyl)bis(methanylylidene))bis(3-oxo-2,3-dihydro-1H-indene-2,1-diylidene))dimalononitrile and its fluorinated analog paired with DRCN5T, an oligothiophene donor seldom investigated in ASM OSCs to date. (Photo)physical studies are conducted on both systems and it is identified that, along with the aforementioned ones, fluorination exerts several additional effects, including the following. First, it optimizes the morphology, thereby accelerating charge separation and reducing geminate recombination charge pairs; second, it suppresses energetic disorder; and third, it prolongs the carrier lifetime and thus aids charge extraction. Consequently, the short-circuit current density and fill factor are significantly enhanced, and in turn, the PCE yields a 36% improvement, climbing to 9.25% and rivaling that of the current state-of-the-art oligothiophene-donor/nonfullerene ASM OSCs. The insights decipher the working mechanism of ASM OSCs that use fluorinated FREAs, paving the way toward high-performance ASM OSCs.

H.T. and C.Y. contributed equally to this work. H.T. thanks the support from Youth Innovation Fund (Y82A260Q10). Z.K. acknowledges the support from National Natural Science Foundation of China (No. 61805245) and CAS Pioneer Hundred Talents Program (Y82A060Q10, Y92A160Q10). G.L. and C.Y. acknowledge the support from Research Grants Council of Hong Kong (Project Nos 15218517, C5037-18G), Shenzhen Science and Technology Innovation Commission (project no. JCYJ20170413154602102), and funding for Project of Strategic Importance provided by Hong Kong Polytechnic University (project code: 1-ZE29). S.L. acknowledges the support from research grants from the National Youth Thousand Program Project (R52A199Z11), the National Special Funds for Repairing and Purchasing Scientific Institutions (Y72Z090Q10), and the “Artificial Intelligence” Key Project of Chongqing (no. cstc2017rgzn-zdyfX0030). This publication was based upon work supported by the King Abdullah University of Science and Technology (KAUST) Office of Sponsored Research (OSR) under award no: OSR-2018-CARF/CCF-3079.