Late Pleistocene-Holocene Slip Rate Along the Hasi Shan Restraining Bend of the Haiyuan Fault: Implication for Faulting Dynamics of a Complex Fault System 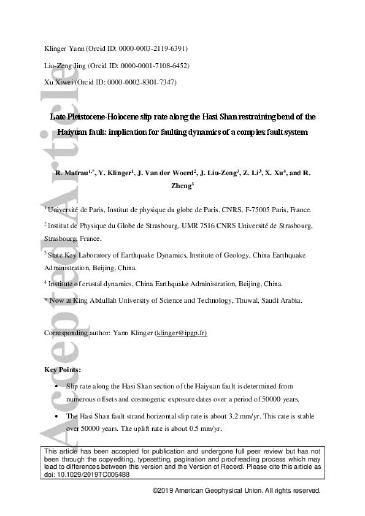 The Haiyuan fault is a major left-lateral strike-slip fault at the boundary between northeast Tibet and the Gobi platform. Combining measurements of offset alluvial terraces with 10Be-26Al cosmogenic radionuclides dating, we bracket the late Quaternary slip rate along the Hasi Shan fault section (37°00′N, 104°25′E) of the Haiyuan fault. At our reference site, terrace-riser offsets for five successive terraces range from ~5 to ~200 m, and associated cosmogenic radionuclide ages range from 9 ± 3 to 44 ± 7 kyr. These measurements yield a geological slip rate between 2.7 and 3.0 mm/year. Extending the offset measurements to the entire Hasi Shan front, it yields a slip rate of 3.2 ± 0.2 mm/year over the last ~50 kyr. Our rate is consistent with the lower estimates of other long-term rates of 4 to 5 mm/year, as well as with geodetic rates of 3 to 5 mm/year, determined in the same area. About 150 km farther west, however, Holocene terraces and moraines offsets have suggested higher slip rate values, between 6 and 15 mm/year. We interpret such discrepancy between rates determined along the western section of the Haiyuan fault and rates determined in the Hasi Shan section as being related to the complex geometry of the Haiyuan fault system along its eastern part, with several active strands moving at the same time and resulting in distributed slip among several sections of the fault system.

We thank the associate editor and an anonymous reviewer for their insightful comments that greatly improve this manuscript. We are grateful to René Boutin at Laboratoire d'Hydrologie et Géochimie de la Surface and ASTER Team (G. Aumaître, D. Bourlès, and K. Keddadouche) at ASTER-CEREGE for ICP-AES and AMS measurements, respectively. Part of this work was supported by INSU-CNRS, France, and the University of Strasbourg, J. Van der Woerd for the Al and Be concentration analyses at LHyGeS and IPGS, and for 10Be/9Be and 26Al/27Al ratios measurements on the Aster AMS facility (GEREGE, Aix-en-Provence, France) supported by INSU-CNRS and IRD. We thank Yang Ye for his help with the chi-square modeling of the depth profile data and A. S. Mériaux for her help with error propagation and mean age calculations. Part of this work has been supported by the CNRS PICS program France-Chine. All slip-rate data discussed in the paper, but the ones derived in this study, are extracted from the published literature listed in the reference list. Pleiades imagery is available for purchase from Airbus industry (https://www.intelligence-airbusds.com/en/8692-pleiades). This is IPGP contribution 4090.