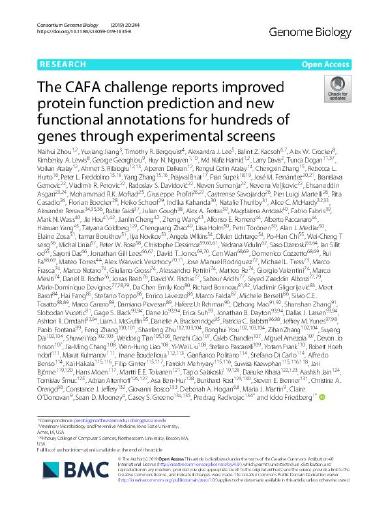 BACKGROUND:The Critical Assessment of Functional Annotation (CAFA) is an ongoing, global, community-driven effort to evaluate and improve the computational annotation of protein function. RESULTS:Here, we report on the results of the third CAFA challenge, CAFA3, that featured an expanded analysis over the previous CAFA rounds, both in terms of volume of data analyzed and the types of analysis performed. In a novel and major new development, computational predictions and assessment goals drove some of the experimental assays, resulting in new functional annotations for more than 1000 genes. Specifically, we performed experimental whole-genome mutation screening in Candida albicans and Pseudomonas aureginosa genomes, which provided us with genome-wide experimental data for genes associated with biofilm formation and motility. We further performed targeted assays on selected genes in Drosophila melanogaster, which we suspected of being involved in long-term memory. CONCLUSION:We conclude that while predictions of the molecular function and biological process annotations have slightly improved over time, those of the cellular component have not. Term-centric prediction of experimental annotations remains equally challenging; although the performance of the top methods is significantly better than the expectations set by baseline methods in C. albicans and D. melanogaster, it leaves considerable room and need for improvement. Finally, we report that the CAFA community now involves a broad range of participants with expertise in bioinformatics, biological experimentation, biocuration, and bio-ontologies, working together to improve functional annotation, computational function prediction, and our ability to manage big data in the era of large experimental screens.

Except where otherwise noted, this item's license is described as This article is open access distributed under the terms of the Creative Commons Attribution 4.0 International License(http://creativecommons.org/licenses/by/4.0/), which permits unrestricted use, distribution, and reproduction in any medium, provided you give appropriate credit to the original author(s) and the source, provide a link to the Creative Commons license, and indicate if changes were made. The Creative Commons Public Domain Dedication waiver(http://creativecommons.org/publicdomain/zero/1.0/) applies to the data made available in this article, unless otherwise stated.