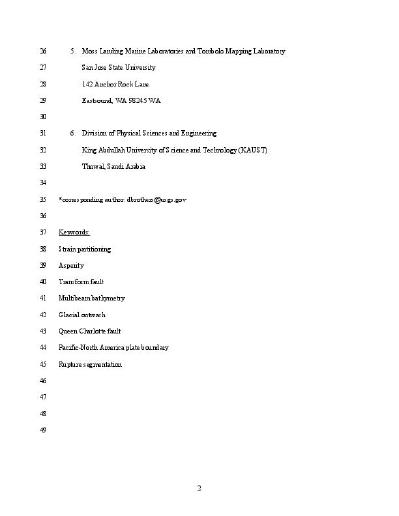 Linking fault behavior over many earthquake cycles to individual earthquake behavior is a primary goal in tectonic geomorphology, particularly across an entire plate boundary. Here, we examine the 1150-km-long, right-lateral Queen Charlotte-Fairweather fault system using comprehensive multibeam bathymetry data acquired along the Queen Charlotte Fault (QCF) offshore southeastern Alaska and western British Columbia. Fine-scale analysis of tectonic geomorphology allowed us to identify and reconstruct 184 strike-slip piercing points over a 630 km stretch of the QCF. Age constraints from glacial recession and offshore sedimentation patterns yield a consistent slip-rate of ∼50–57 mm/yr since ∼17–12 ka, the fastest rate for a continent-ocean strike-slip fault on Earth. These slip-rates equal or exceed estimates of Pacific-North America (PA-NA) relative motion from global plate reconstructions, indicating that PA-NA motion is highly localized. The QCF cuts the seafloor along a narrow and unusually straight trace for its entire length and multiple fault traces are observed only at local step-overs. The geometry and behavior of the QCF over many earthquake cycles is simple and typical of mature faults with relatively homogeneous stress fields. Since the QCF is the primary PA-NA plate boundary, we used the trace of the QCF to define the small circle path for relative plate motion and computed the associated Euler pole. Predicted along-strike obliquity variations based on the new pole agree with observed tectonic geomorphology and suggest that previous global plate reconstructions overestimated the degree of oblique convergence along the QCF. We also find that subtle, long-wavelength (75–150 km) bends and discrete step-overs appear to define the endpoints of M>7 earthquakes, suggesting that obliquity and resultant fault geometry may control rupture segmentation and asperity development. Lastly, the agreement between predicted obliquity and tectonic geomorphology along the entire length of QCF compelled a reevaluation of regional tectonic models. In the north, the eastern Yakatat Terrane appears to be translating northwest with the Pacific plate, and slip transferred from the QCF to the Fairweather Fault results in ∼20 mm/yr of convergence along the southern St. Elias mountains. In the south, we predict a reduced rate of convergence along the QCF west of Haida Gwaii (∼5–6 mm/yr of shortening, on average) relative to previous studies. Our results support a model for transpression and strike-slip partitioning along the edge of a hot and weak Pacific Plate, leading to crustal thickening and growth of the Queen Charlotte Terrace to the west of Haida Gwaii.

We thank the following individuals and organizations involved with the multibeam bathymetry surveys along the QCF: Jared Kluesner, Jackson Currie, Gerry Hatcher, Rob Wyland, Uri ten Brink, and Chuck Worley of the USGS; Robert Kung of the GSC; Kristen Green, Jim DeLaBruere, Cedar Stark, Craig Conger, Dave Anderson and James Wiese of the Alaska Department of Fish and Game; Doug MacGillivray and David Maggio of Terrasond Limited; the NOAA Integrated Ocean and Coastal Mapping Project; Kris Ludwig, John Lewis and STEMSEAS program; the crews of NOAA Ship Fairweather and Canadian Coast Guard vessels Vector and Tully. We also thank Scott Bennett, Anne Tréhu, Thorne Lay, Jason Addison, Tom Ager, and Jim Baichtal for helpful discussions and/or reviews of this article. The U.S. Geological Survey and the Geological Survey of Canada jointly funded this study; the publication was in part supported by funding from King Abdullah University of Science and Technology (KAUST), grant BAS/1/1339-01-01. Any use of trade, product, or firm names is for descriptive purposes only and does not imply endorsement by the U.S. Government.