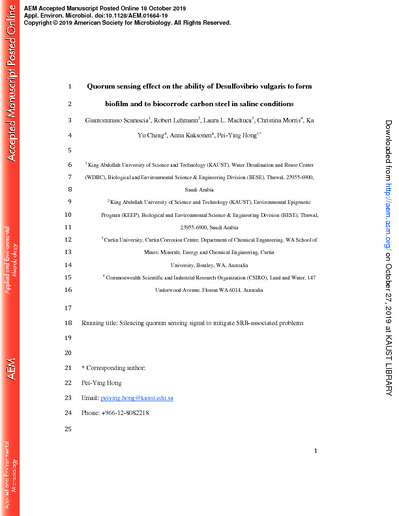 Sulfate reducing bacteria (SRB) are key contributors to microbial induced corrosion (MIC), which can lead to serious economic and environmental impact. The presence of a biofilm significantly increases the MIC rate. Inhibition of the quorum sensing (QS) system is a promising alternative approach to prevent biofilm formation in various industrial settings, especially considering the significant ecological impact of conventional chemical-based mitigation strategies. In this study, the effect of the QS stimulation and inhibition on Desulfovibrio vulgaris was described in terms of anaerobic respiration, cell activity, biofilm formation and biocorrosion of carbon steel. All these traits were repressed when bacteria were in contact with QS inhibitors, while they were enhanced upon exposure to QS signal molecules as compared to the control. The difference in the treatments was confirmed by transcriptomic analysis performed at different time points after treatments application. Genes related to lactate and pyruvate metabolism, sulfate reduction, electrons transfer and biofilm formation were downregulated upon QS inhibition. On the contrary, QS stimulation led to an upregulation of the above-mentioned genes compared with the control. In summary, these results reveal the impact of QS on the activity of D. vulgaris, paving the way towards the prevention of corrosive SRB biofilm formation via QS inhibition.IMPORTANCE Sulfate reducing bacteria (SRB) are considered key contributors to biocorrosion, particularly in saline environments. Biocorrosion imposes tremendous economic costs, and common approaches to mitigate this problem involve the use of toxic and hazardous chemicals (e.g. chlorine), which raise health and environmental safety concerns. Quorum sensing inhibitors (QSI) can be used as an alternative approach to inhibit biofilm formation and biocorrosion. However, this approach would only be effective if SRB rely on QS for the pathways associated with biocorrosion. These pathways would include biofilm formation, electron transfer, and metabolism. This study demonstrates the role of QS in Desulfovibrio vulgaris on the abovementioned pathways through both phenotypic measurements and transcriptomic approach. The results of this study suggest that QSI can be used to mitigate SRB-induced corrosion problems in ecologically sensitive areas.

The research presented in this publication was supported by CRG funding URF/1/2982-61201-01 from King Abdullah University of Science and Technology (KAUST) awarded to P-YH. AK, CM and KYCthank KAUST and CSIRO Land and Water for financial support.The authors would like to thank Lina Marcela Silva Bedoya, Silvia Salgar Chaparro, Erika Suarez Rodriguez, Benjamin Tuck and Katelyn Boase from the Curtin Corrosion Centre at Curtin University for the warm hospitality and their support.