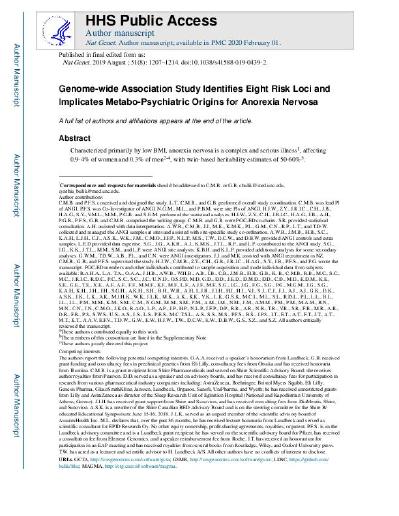 Characterized primarily by a low body-mass index, anorexia nervosa is a complex and serious illness1, affecting 0.9–4% of women and 0.3% of men2,3,4, with twin-based heritability estimates of 50–60%5. Mortality rates are higher than those in other psychiatric disorders6, and outcomes are unacceptably poor7. Here we combine data from the Anorexia Nervosa Genetics Initiative (ANGI)8,9 and the Eating Disorders Working Group of the Psychiatric Genomics Consortium (PGC-ED) and conduct a genome-wide association study of 16,992 cases of anorexia nervosa and 55,525 controls, identifying eight significant loci. The genetic architecture of anorexia nervosa mirrors its clinical presentation, showing significant genetic correlations with psychiatric disorders, physical activity, and metabolic (including glycemic), lipid and anthropometric traits, independent of the effects of common variants associated with body-mass index. These results further encourage a reconceptualization of anorexia nervosa as a metabo-psychiatric disorder. Elucidating the metabolic component is a critical direction for future research, and paying attention to both psychiatric and metabolic components may be key to improving outcomes.

Grant support for ANGI, the PGC-ED and its component groups is shown in Supplementary Table 17. We thank all study volunteers, study coordinators and research staff who enabled this study. ANGI: The Anorexia Nervosa Genetics Initiative is an initiative of the Klarman Family Foundation. Additional support was offered by the National Institute of Mental Health. We are deeply grateful to all of the individuals who, through their participation, made ANGI a success. The goodwill that permeated the eating disorders community fueled by the enthusiasm of prominent bloggers, advocates, clinicians, treatment centers, scientists, organizations, families and especially those who have suffered from anorexia nervosa, yielded in an unprecedented and inspired global movement to complete this science. ANGI (United States): We thank Walden Behavioral Care, McCallum Place and the Renfrew Center for assisting with recruitment. We express our gratitude to J. Alexander (http://www.junealexander.com/) and C. Arnold (http://carriearnold.com/), who helped us disseminate information about ANGI. We acknowledge support from the North Carolina Translational and Clinical Sciences Institute (NC TraCS), the Carolina Data Warehouse and the Foundation of Hope, Raleigh, North Carolina. ANGI (Australia and New Zealand): We thank the Australia & and New Zealand Academy for Eating Disorders for assistance with recruitment and publicity. We thank VIVA! Communications for their efforts in promoting the study and the Butterfly Foundation for their ongoing support of anorexia nervosa research in Australia and EDANZ in New Zealand. We thank the QSkin Sun and Health Study for controls. We also acknowledge the assistance of S. Maguire and J. Russell (University of Sydney), P. Hay (Western Sydney University), S. Madden (Western Sydney University and the Sydney Children’s Hospital Network), S. Sawyer and E. Hughes (Royal Children’s Hospital, Melbourne), K. Fairweather-Schmidt (Flinders University), A. Fursland (Centre for Clinical Interventions and Curtin University), J. McCormack (Princess Margaret Hospital for Children), F. Wagg (Royal Hobart Hospital) and W. Ward (Royal Brisbane and Women’s Hospital) in recruitment. We also thank L. Nunn for validation work on the ED100Kv1 Questionnaire. Additionally, administrative support for data collection was received from the Australian Twin Registry, which is supported by an Enabling Grant (ID 310667) from the NHMRC administered by the University of Melbourne. In New Zealand, we also acknowledge assistance with recruitment from M. Roberts (University of Auckland), R. Lawson (South Island Eating Disorders Service), M. Meiklejohn (Auckland District Health Board) and R. Mysliwiec. Special thanks to those who provided their stories in relation to publicity about ANGI. ANGI (Sweden): We acknowledge the assistance of the Stockholm Centre for Eating Disorders (SCÄ) and thank the Swedish National Quality Register for Eating Disorders (Riksät) and Lifegene. We would also like to thank the research nurses and data collectors at the Department of Medical Epidemiology and Biostatistics who worked on ANGI. ANGI (Denmark): We thank the Lundbeck Foundation Initiative for Integrative Psychiatric Research (iPSYCH). PGC: We are deeply indebted to the investigators who comprise the PGC and to the hundreds of thousands of individuals who have shared their life experiences with PGC investigators and the contributing studies. We are grateful to the Children’s Hospital of Philadelphia (CHOP), the Price Foundation Collaborative Group (PFCG), Genetic Consortium for Anorexia Nervosa (GCAN), Wellcome Trust Case-Control Consortium-3 (WTCCC-3), the UK Biobank and all PGC-ED members for their support in providing individual samples used in this study. We thank SURFsara (http://www.surf.nl) for support in using the Lisa Compute Cluster. We thank M. Lam for Ricopili consultation. This study also represents independent research partly funded by the English National Institute for Health Research (NIHR) Biomedical Research Centre at South London and Maudsley NHS Foundation Trust and King’s College London and the NIHR BioResource. The views expressed are those of the author(s) and not necessarily those of the NHS, the NIHR or the English Department of Health and Social Care. High performance computing facilities were funded with capital equipment grants from the GSTT Charity (TR130505) and Maudsley Charity (980). Research reported in this publication was also supported by the National Institute of Mental Health of the US National Institutes of Health under Award Numbers U01MH109528 and U01MH109514. The content is solely the responsibility of the authors and does not necessarily represent the official views of the US National Institutes of Health.