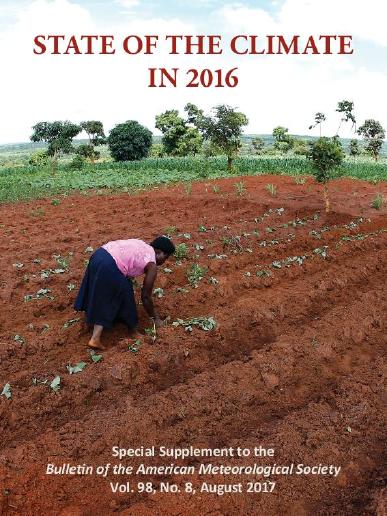 In 2016, the dominant greenhouse gases released into Earth's atmosphere-carbon dioxide, methane, and nitrous oxide-continued to increase and reach new record highs. The 3.5 ± 0.1 ppm rise in global annual mean carbon dioxide from 2015 to 2016 was the largest annual increase observed in the 58-year measurement record. The annual global average carbon dioxide concentration at Earth's surface surpassed 400 ppm (402.9 ± 0.1 ppm) for the first time in the modern atmospheric measurement record and in ice core records dating back as far as 800000 years. One of the strongest El Niño events since at least 1950 dissipated in spring, and a weak La Niña evolved later in the year. Owing at least in part to the combination of El Niño conditions early in the year and a long-term upward trend, Earth's surface observed record warmth for a third consecutive year, albeit by a much slimmer margin than by which that record was set in 2015. Above Earth's surface, the annual lower troposphere temperature was record high according to all datasets analyzed, while the lower stratospheric temperature was record low according to most of the in situ and satellite datasets. Several countries, including Mexico and India, reported record high annual temperatures while many others observed near-record highs. A week-long heat wave at the end of April over the northern and eastern Indian peninsula, with temperatures surpassing 44°C, contributed to a water crisis for 330 million people and to 300 fatalities. In the Arctic the 2016 land surface temperature was 2.0°C above the 1981-2010 average, breaking the previous record of 2007, 2011, and 2015 by 0.8°C, representing a 3.5°C increase since the record began in 1900. The increasing temperatures have led to decreasing Arctic sea ice extent and thickness. On 24 March, the sea ice extent at the end of the growth season saw its lowest maximum in the 37-year satellite record, tying with 2015 at 7.2% below the 1981-2010 average. The September 2016 Arctic sea ice minimum extent tied with 2007 for the second lowest value on record, 33% lower than the 1981-2010 average. Arctic sea ice cover remains relatively young and thin, making it vulnerable to continued extensive melt. The mass of the Greenland Ice Sheet, which has the capacity to contribute ∼7 m to sea level rise, reached a record low value. The onset of its surface melt was the second earliest, after 2012, in the 37-year satellite record. Sea surface temperature was record high at the global scale, surpassing the previous record of 2015 by about 0.01°C. The global sea surface temperature trend for the 21st centuryto-date of +0.162°C decade-1 is much higher than the longer term 1950-2016 trend of +0.100°C decade-1. Global annual mean sea level also reached a new record high, marking the sixth consecutive year of increase. Global annual ocean heat content saw a slight drop compared to the record high in 2015. Alpine glacier retreat continued around the globe, and preliminary data indicate that 2016 is the 37th consecutive year of negative annual mass balance. Across the Northern Hemisphere, snow cover for each month from February to June was among its four least extensive in the 47-year satellite record. Continuing a pattern below the surface, record high temperatures at 20-m depth were measured at all permafrost observatories on the North Slope of Alaska and at the Canadian observatory on northernmost Ellesmere Island. In the Antarctic, record low monthly surface pressures were broken at many stations, with the southern annular mode setting record high index values in March and June. Monthly high surface pressure records for August and November were set at several stations. During this period, record low daily and monthly sea ice extents were observed, with the November mean sea ice extent more than 5 standard deviations below the 1981-2010 average. These record low sea ice values contrast sharply with the record high values observed during 2012-14. Over the region, springtime Antarctic stratospheric ozone depletion was less severe relative to the 1991-2006 average, but ozone levels were still low compared to pre-1990 levels. Closer to the equator, 93 named tropical storms were observed during 2016, above the 1981-2010 average of 82, but fewer than the 101 storms recorded in 2015. Three basins-the North Atlantic, and eastern and western North Pacific-experienced above-normal activity in 2016. The Australian basin recorded its least active season since the beginning of the satellite era in 1970. Overall, four tropical cyclones reached the Saffir-Simpson category 5 intensity level. The strong El Niño at the beginning of the year that transitioned to a weak La Niña contributed to enhanced precipitation variability around the world. Wet conditions were observed throughout the year across southern South America, causing repeated heavy flooding in Argentina, Paraguay, and Uruguay. Wetter-than-usual conditions were also observed for eastern Europe and central Asia, alleviating the drought conditions of 2014 and 2015 in southern Russia. In the United States, California had its first wetter-than-average year since 2012, after being plagued by drought for several years. Even so, the area covered by drought in 2016 at the global scale was among the largest in the post-1950 record. For each month, at least 12% of land surfaces experienced severe drought conditions or worse, the longest such stretch in the record. In northeastern Brazil, drought conditions were observed for the fifth consecutive year, making this the longest drought on record in the region. Dry conditions were also observed in western Bolivia and Peru; it was Bolivia's worst drought in the past 25 years. In May, with abnormally warm and dry conditions already prevailing over western Canada for about a year, the human-induced Fort McMurray wildfire burned nearly 590000 hectares and became the costliest disaster in Canadian history, with $3 billion (U.S. dollars) in insured losses.

The report's editors wish to thank the AMS Journals editorial staff, in particular Melissa Fernau, for facilitating the document, and to the NCEI graphics team for laying the document out and executing the countless number of technical edits needed. We also wish to express our sincere and deep gratitude to Dr. Rick Rosen, who served as the AMS special editor for this report. Dr. Rosen's handling of the reviews was at the same time rigorous and responsive, and greatly improved the document.

Bulletin of the American Meteorological Society