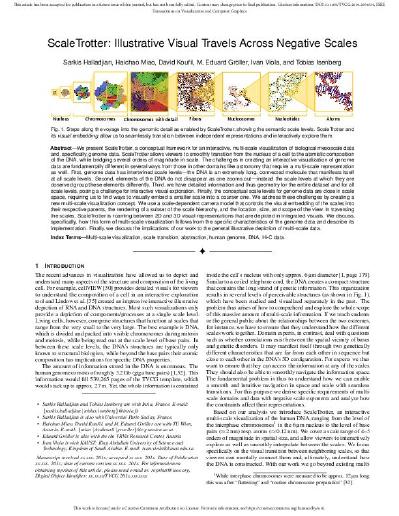 We present ScaleTrotter, a conceptual framework for an interactive, multi-scale visualization of biological mesoscale data and, specifically, genome data. ScaleTrotter allows viewers to smoothly transition from the nucleus of a cell to the atomistic composition of the DNA, while bridging several orders of magnitude in scale. The challenges in creating an interactive visualization of genome data are fundamentally different in several ways from those in other domains like astronomy that require a multi-scale representation as well. First, genome data has intertwined scale levels-the DNA is an extremely long, connected molecule that manifests itself at all scale levels. Second, elements of the DNA do not disappear as one zooms out-instead the scale levels at which they are observed group these elements differently. Third, we have detailed information and thus geometry for the entire dataset and for all scale levels, posing a challenge for interactive visual exploration. Finally, the conceptual scale levels for genome data are close in scale space, requiring us to find ways to visually embed a smaller scale into a coarser one. We address these challenges by creating a new multi-scale visualization concept. We use a scale-dependent camera model that controls the visual embedding of the scales into their respective parents, the rendering of a subset of the scale hierarchy, and the location, size, and scope of the view. In traversing the scales, ScaleTrotter is roaming between 2D and 3D visual representations that are depicted in integrated visuals. We discuss, specifically, how this form of multi-scale visualization follows from the specific characteristics of the genome data and describe its implementation. Finally, we discuss the implications of our work to the general illustrative depiction of multi-scale data.

We thank the genome scientists who provided the data that our tool relies on and who answered our questions about it. We also thank everyone who provided feedback about our approach. Part of this work was funded under the ILLUSTRARE grant by both the Austrian Science Fund (FWF): I 2953-N31 and the French National Research Agency (ANR): ANR-16-CE91-0011-01. The research was further supported by funding from King Abdullah University of Science and Technology (KAUST), under award number BAS/1/1680-01-01 and by funding from ILLVISATION grant by WWTF (VRG11-010). Authors would like to thank Nanographics GmbH (nanographics.at) for providing the Marion Software Framework. This paper was partly written in collaboration with the VRVis Competence Center. VRVis is funded by BMVIT, BMWFW, Styria, SFG and Vienna Business Agency in the scope of COMET – Competence Centers for Excellent Technologies (854174), which is managed by FFG.

Except where otherwise noted, this item's license is described as This work is licensed under a Creative Commons Attribution 4.0 License. For more information, see https://creativecommons.org/licenses/by/4.0/.