Exhaustion of CD4+ T-cells mediated by the Kynurenine Pathway in Melanoma. 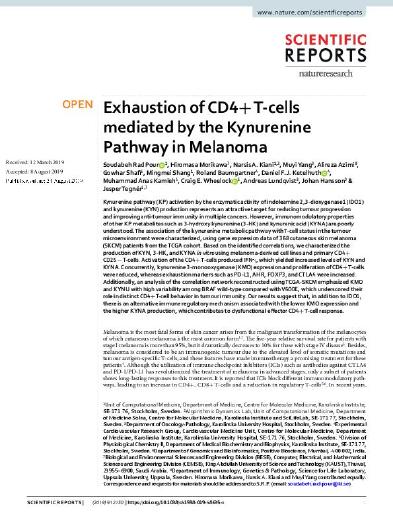 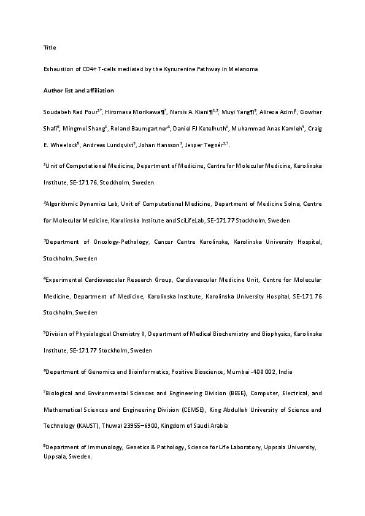 Kynurenine pathway (KP) activation by the enzymatic activity of indoleamine 2,3-dioxygenase1 (IDO1) and kynurenine (KYN) production represents an attractive target for reducing tumour progression and improving anti-tumour immunity in multiple cancers. However, immunomodulatory properties of other KP metabolites such as 3-hydroxy kynurenine (3-HK) and kynurenic acid (KYNA) are poorly understood. The association of the kynurenine metabolic pathway with T-cell status in the tumour microenvironment were characterized, using gene expression data of 368 cutaneous skin melanoma (SKCM) patients from the TCGA cohort. Based on the identified correlations, we characterized the production of KYN, 3-HK, and KYNA in vitro using melanoma-derived cell lines and primary CD4+ CD25- T-cells. Activation of the CD4+ T-cells produced IFNγ, which yielded increased levels of KYN and KYNA. Concurrently, kynurenine 3-monooxygenase (KMO) expression and proliferation of CD4+ T-cells were reduced, whereas exhaustion markers such as PD-L1, AHR, FOXP3, and CTLA4 were increased. Additionally, an analysis of the correlation network reconstructed using TCGA-SKCM emphasized KMO and KYNU with high variability among BRAF wild-type compared with V600E, which underscored their role in distinct CD4+ T-cell behavior in tumour immunity. Our results suggest that, in addition to IDO1, there is an alternative immune regulatory mechanism associated with the lower KMO expression and the higher KYNA production, which contributes to dysfunctional effector CD4+ T-cell response.

We thank Dr. Rolf Kiessling, Dr. Suzanne Egyhazi Brage for kindly providing us with the melanoma cell lines. We thank Angelika Schmidt and Veronica Höiom for their valuable comments. Annika van Vollenhoven is acknowledged for her assistance with the flow cytometer. Peri Noori and Matilda Eriksson (Computational Medicine Unit, KI) are acknowledged for laboratory management and technical advice. We thank Pernilla Appelquist and Raffaella Giugliano for their editorial support.