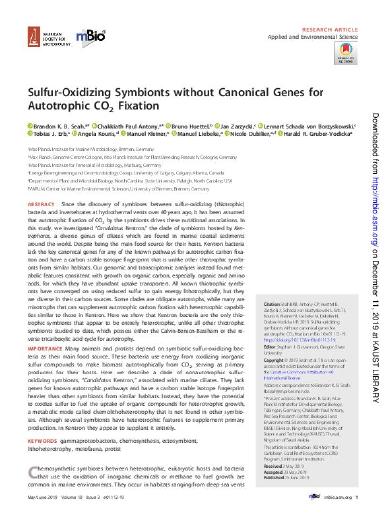 Since the discovery of symbioses between sulfur-oxidizing (thiotrophic) bacteria and invertebrates at hydrothermal vents over 40 years ago, it has been assumed that autotrophic fixation of CO2by the symbionts drives these nutritional associations. In this study, we investigatedCandidatusKentron, the clade of symbionts hosted byKentrophoros, a diverse genus of ciliates which are found in marine coastal sediments around the world. Despite being the main food source for their hosts, Kentron lack the key canonical genes for any of the known pathways for autotrophic fixation, and have a carbon stable isotope fingerprint unlike other thiotrophic symbionts from similar habitats. Our genomic and transcriptomic analyses instead found metabolic features consistent with growth on organic carbon, especially organic and amino acids, for which they have abundant uptake transporters. All known thiotrophic symbionts have converged on using reduced sulfur to generate energy lithotrophically, but they are diverse in their carbon sources. Some clades are obligate autotrophs, while many are mixotrophs that can supplement autotrophic carbon fixation with heterotrophic capabilities similar to those in Kentron. We have shown that Kentron are the only thiotrophic symbionts that appear to be entirely heterotrophic, unlike all other thiotrophic symbionts studied to date, which possess either the Calvin-Benson-Bassham or reverse tricarboxylic acid cycles for autotrophy.Significance StatementMany animals and protists depend on symbiotic sulfur-oxidizing bacteria as their main food source. These bacteria use energy from oxidizing inorganic sulfur compounds to make biomass autotrophically from CO2, serving as primary producers for their hosts. Here we describe apparently non-autotrophic sulfur symbionts called Kentron, associated with marine ciliates. They lack genes for known autotrophic pathways, and have a carbon stable isotope fingerprint heavier than other symbionts from similar habitats. Instead they have the potential to oxidize sulfur to fuel the uptake of organic compounds for heterotrophic growth, a metabolic mode called chemolithoheterotrophy that is not found in other symbioses. Although several symbionts have heterotrophic features to supplement primary production, in Kentron they appear to supplant it entirely.

Except where otherwise noted, this item's license is described as Archived with thanks to Cold Spring Harbor Laboratory