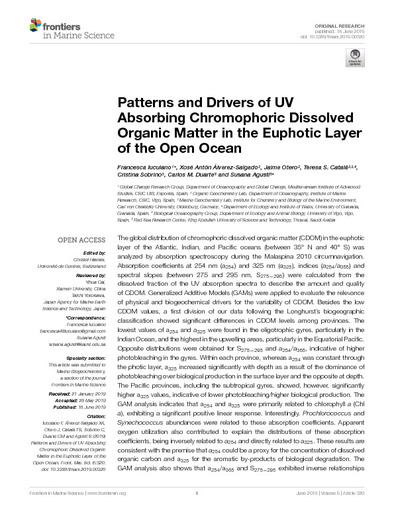 The global distribution of chromophoric dissolved organic matter (CDOM) in the euphotic layer of the Atlantic, Indian, and Pacific oceans (between 35° N and 40° S) was analyzed by absorption spectroscopy during the Malaspina 2010 circumnavigation. Absorption coefficients at 254 nm (a254) and 325 nm (a325), indices (a254/a365) and spectral slopes (between 275 and 295 nm, S275-295) were calculated from the dissolved fraction of the UV absorption spectra to describe the amount and quality of CDOM. Generalized Additive Models (GAMs) were applied to evaluate the relevance of physical and biogeochemical drivers for the variability of CDOM. Besides the low CDOM values, a first division of our data following the Longhurst's biogeographic classification showed significant differences in CDOM levels among provinces. The lowest values of a254 and a325 were found in the oligotrophic gyres, particularly in the Indian Ocean, and the highest in the upwelling areas, particularly in the Equatorial Pacific. Opposite distributions were obtained for S275-295 and a254/a365, indicative of higher photobleaching in the gyres. Within each province, whereas a254 was constant through the photic layer, a325 increased significantly with depth as a result of the dominance of photobleaching over biological production in the surface layer and the opposite at depth. The Pacific provinces, including the subtropical gyres, showed, however, significantly higher a325 values, indicative of lower photobleaching/higher biological production. The GAM analysis indicates that a254 and a325 were primarily related to chlorophyll a (Chl a), exhibiting a significant positive linear response. Interestingly, Prochlorococcus and Synechococcus abundances were related to these absorption coefficients. Apparent oxygen utilization also contributed to explain the distributions of these absorption coefficients, being inversely related to a254 and directly related to a325. These results are consistent with the premise that a254 could be a proxy for the concentration of dissolved organic carbon and a325 for the aromatic by-products of biological degradation. The GAM analysis also shows that a254/a365 and S275-295 exhibited inverse relationships with solar radiation, indicating that the biological production of CDOM counteracts photodegradation as solar radiation increases. In summary, whereas photobleaching dictates the vertical distribution of CDOM, Chl a explains the CDOM differences among the photic layer of the tropical and subtropical ocean provinces visited during the circumnavigation.

This study was funded by the Ingenio-Consolider project Malaspina 2010 Circumnavigation Expedition (MICINN CSD2008-00077). FI and JO were supported by a fellowship from the “Junta para la Ampliación de Estudios” (JAE-preDOC and JAE-postDOC programs 2011, respectively) from the CSIC.