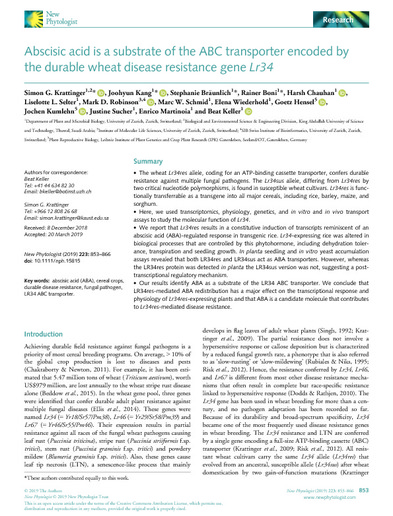 The wheat Lr34res allele, coding for an ATP-binding cassette transporter, confers durable resistance against multiple fungal pathogens. The Lr34sus allele, differing from Lr34res by two critical nucleotide polymorphisms, is found in susceptible wheat cultivars. Lr34res is functionally transferrable as a transgene into all major cereals, including rice, barley, maize, and sorghum. Here, we used transcriptomics, physiology, genetics, and in vitro and in vivo transport assays to study the molecular function of Lr34. We report that Lr34res results in a constitutive induction of transcripts reminiscent of an abscisic acid (ABA)-regulated response in transgenic rice. Lr34-expressing rice was altered in biological processes that are controlled by this phytohormone, including dehydration tolerance, transpiration and seedling growth. In planta seedling and in vitro yeast accumulation assays revealed that both LR34res and LR34sus act as ABA transporters. However, whereas the LR34res protein was detected in planta the LR34sus version was not, suggesting a post-transcriptional regulatory mechanism. Our results identify ABA as a substrate of the LR34 ABC transporter. We conclude that LR34res-mediated ABA redistribution has a major effect on the transcriptional response and physiology of Lr34res-expressing plants and that ABA is a candidate molecule that contributes to Lr34res-mediated disease resistance.

We are grateful to Professor Yutaka Sato from the NARO Hokkaido Agricultural Research Center, Japan, for providing seeds of the OsABA8ox1 overexpressing line 27-3. We would also like to thank Professor Kazuo Shinozaki from the Riken Center for Sustainable Resource Science for providing valuable comments on the manuscript, Gabriele Buchmann for producing the p6Uyeast vector, Dr Tina Jordan for producing the Lr34 yeast cDNA constructs, Sabine Sommerfeld for excellent technical assistance with the barley transformations, and Professor Anne C. Roulin for assistance with statistical analyses. This work was supported by an Advanced Investigator grant from the European Research Council (ERC-2009-AdG 249996, Durable resistance) and by the Swiss National Science Foundation grant 310030_163260. SGK and JK received support from an Ambizione fellowship of the Swiss National Science Foundation.