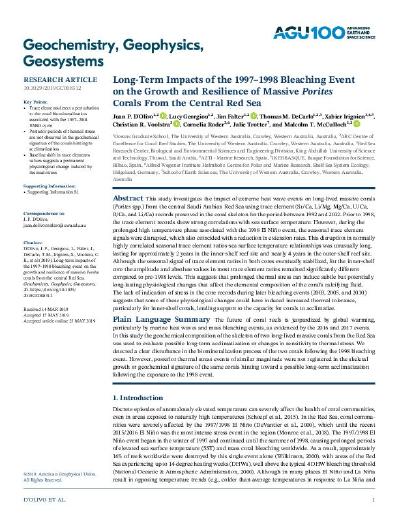 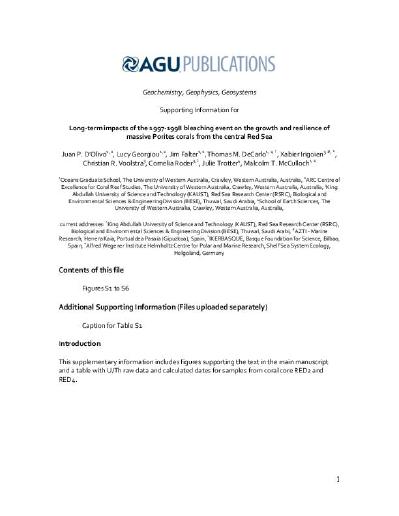 This study investigates the impact of extreme heat wave events on long-lived massive corals (Porites spp.) from the central Saudi Arabian Red Sea using trace element (Sr/Ca, Li/Mg, Mg/Ca, U/Ca, B/Ca, and Li/Ca) records preserved in the coral skeleton for the period between 1992 and 2012. Prior to 1998, the trace element records show strong correlations with sea surface temperature. However, during the prolonged high temperature phase associated with the 1998 El Niño event, the seasonal trace element signals were disrupted, which also coincided with a reduction in extension rates. This disruption in normally highly correlated seasonal trace element ratios-sea surface temperature relationships was unusually long, lasting for approximately 2 years in the inner-shelf reef site and nearly 4 years in the outer-shelf reef site. Although the seasonal signal of trace element ratios in both cores eventually stabilized, for the inner-shelf core the amplitude and absolute values in most trace element ratios remained significantly different compared to pre-1998 levels. This suggests that prolonged thermal stress can induce subtle but potentially long-lasting physiological changes that affect the elemental composition of the coral's calcifying fluid. The lack of indication of stress in the core records during later bleaching events (2003, 2005, and 2010) suggests that some of these physiological changes could have induced increased thermal tolerance, particularly for inner-shelf corals, lending support to the capacity for corals to acclimatize.

We would like to acknowledge the team at KAUST for their support, knowledge, and hospitality while the coral cores were being retrieved. With special thanks to Anna Roik for her input in this paper. We thank the technical staff of AGFIOR, Kai Rankenburg and Anne-Marin Nisumaa Comeau for their laboratory expertise. This research was supported by King Abdullah University of Science and Technology (KAUST) and by funding provided by an ARC Laureate Fellowship (LF120100049) awarded to Professor Malcolm McCulloch and the ARC Centre of Excellence for Coral Reef Studies (CE140100020). All the geochemical data generated are available at https://doi.pangaea.de/10.1594/PANGAEA.901186.