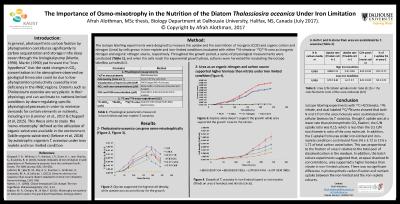 The Importance of Osmo-mixotrophy in the Nutrition of the Diatom ThalassiosiraoceanicaUnder Iron Limitation Afrah Alothman, MSc thesis, Biology Department at Dalhousie University, Halifax, NS, Canada (July 2017). © Copyright by Afrah Alothman, 2017 Introduction: In general, photosynthetic carbon fixation by phytoplankton contributes significantly to carbon sequestration and storage in the deep ocean through the biological pump (Martin, 1990). Martin (1990) put forward the “iron hypothesis” that the rapid changes in CO2concentration in the atmosphere observed on geological timescales could be due to low phytoplankton productivity caused by iron deficiency in the HNLC regions. Diatoms such as Thalassiosira oceanica arevery plastic in their physiology and can acclimate to nutrient-limited conditions by down-regulating specific physiological processes in order to minimize demands for certain elements or nutrients, including iron (Lommer et al., 2012 &amp; Chappell et al, 2015). This thesis aims to study the ‘osmo-mixotrophy’ defined as the utilization of organic substrates available in the environment(labile organic substrates) (Selosseet al, 2016) by autotrophic organism T. oceanica under iron replete and iron limited condition. Method: The isotope labelling experiments were designed to measure the uptake and the assimilation of inorganic (CO2) and organic carbon and nitrogen (Urea) by cells grown in iron-replete and iron-limited conditions incubated with either15N-nitrateor13C/15N-ureaas inorganic nitrogen and organic nitrogen source, respectively. Throughout the growth period, a series of physiological measurements were conducted (Table 1), and when the cells reach the exponential growth phase, cultures were harvested for incubating the isotope labelling samples(ILE). Results: 1- Thalassiosira oceanicacan grow osmo-mixotrophically (Figure 2, Figure 3). 2- Urea as an organic nitrogen and carbon source supported higher biomass than nitrate under iron limited condition(Figure 4) 3- Both C and N atoms from urea are assimilated by T. oceanica(Table 2). Conclusion Isotope labeling experiments with 13C-HCO3onate,15N-nitrate, and dual labeled 13C/15N urea showed that both N and C from the urea molecule were assimilated into cellular biomass by T. oceanica, though C uptake was at a lower rate than photosynthetic CO2fixation; the C/N uptake ratio was 0.15, which is less than the 0.5 C/N stoichiometric ratio of the urea molecule. In addition, the C uptake from urea under iron-limited and iron-replete conditions contributed from 5% ± 3.72to 11% ± 1.71 of total carbon assimilation. This was proportional to the fraction of urea-C relative to the total pool of dissolved carbon in the medium. In addition, the batch culture experiments suggested that, at equal dissolved N concentrations, urea supported a higher biomass than nitrate in iron-limited cultures. There was no significant difference in photosynthetic carbon fixation and nutrient uptake between the iron-limited and the iron-replete cultures. References: Chappell, P. D., Whitney, L. P., Wallace, J. R., Darer, A. I., Jean-Charles, S., &amp; Jenkins, B. D. (2015). Genetic indicators of iron limitation in wild populations of Thalassiosira oceanicafrom the northeast Pacific Ocean. The ISME journal, 9(3), 592-602. Lommer, M., Specht, M., Roy, A. S., Kraemer, L., Andreson, R.,Gutowska, M. A., &amp;LaRoche, J. (2012). Genome and low-iron response of an oceanic diatom adapted to chronic iron limitation. Genome biology, 13(7), R66. Martin, J. H. (1990). Glacial‐interglacial CO2 change: The iron hypothesis. Paleoceanography,5(1), 1-13.‏ Selosse, M. A., Charpin, M., &amp; Not, F. (2016). Mixotrophyeverywhere on land and in water: the grand écarthypothesis. Ecology Letters.