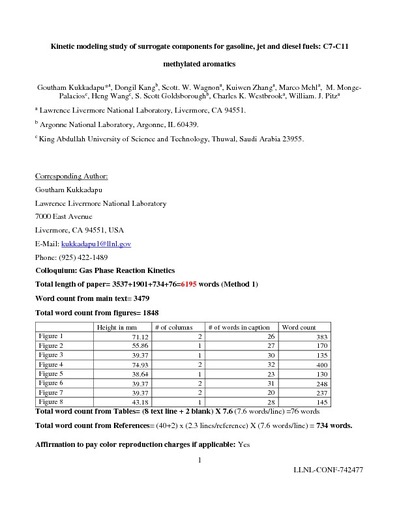 Kinetic mechanisms for aromatics are needed to successfully simulate the autoignition of transportation fuels using the surrogate fuel approach. An aromatic detailed kinetic mechanism that describes kinetics of C7-C11 methylated aromatics, including toluene, o-xylene, p-xylene, 1,2,4-trimethylbenzene, 1,3,5, trimethylbenzene and ?methylnaphthalene has been developed in the current study. The kinetic mechanism was built hierarchically using similar set of reaction pathways and reaction rate rules. In the mechanism developed, special emphasis is put on describing the detailed low-temperature ignition chemistry of o-xylene and 1,2,4-trimethylbenzene and, to our knowledge, this is the first attempt to do so in a detailed kinetic mechanism. In addition to kinetic modeling, new experimental data were acquired for toluene, o-xylene, and 1,2,4-trimethylbenzene using a rapid compression machine at low-to-intermediate temperatures and engine relevant pressures. In addition, the mechanism has been compared against data sets from the literature covering ignition delay times, flame speeds, and speciation profiles measured in a jet-stirred reactor and flow reactor. Good agreement is observed between the mechanism predictions and the experimental data. Kinetic analysis demonstrated the importance of including the low temperature chemistry of the benzylperoxy radicals to accurately capture the ignition propensity of o-xylene and 1,2,4-trimethylbenzene at low-to-intermediate temperatures and high pressures. The kinetic mechanism developed in the current study can be used for surrogate modeling of gasoline, jet and diesel fuels.

The work at LLNL was performed under the auspices of the U.S. Department of Energy (DOE), Contract DE-AC52-07NA27344 and was conducted as part of the Co-Optimization of Fuels & Engines (Co-Optima) project sponsored by the DOE Office of Energy Efficiency and Renewable Energy (EERE), Bioenergy Technologies and Vehicle Technologies Offices. The work at ANL is performed under Contract DE-AC02-06CH11357.

Proceedings of the Combustion Institute