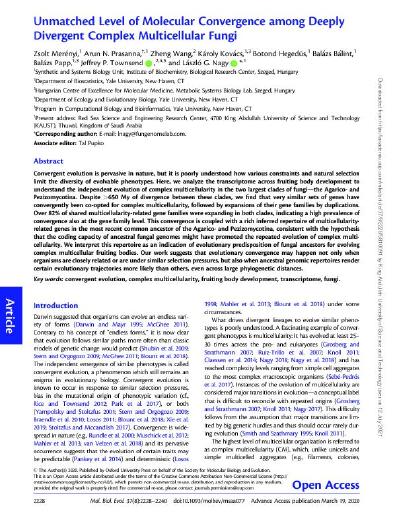 Convergent evolution is pervasive in nature, but it is poorly understood how various constraints and natural selection limit the diversity of evolvable phenotypes. Here, we analyze the transcriptome across fruiting body development to understand the independent evolution of complex multicellularity in the two largest clades of fungi—the Agarico- and Pezizomycotina. Despite >650 My of divergence between these clades, we find that very similar sets of genes have convergently been co-opted for complex multicellularity, followed by expansions of their gene families by duplications. Over 82% of shared multicellularity-related gene families were expanding in both clades, indicating a high prevalence of convergence also at the gene family level. This convergence is coupled with a rich inferred repertoire of multicellularity-related genes in the most recent common ancestor of the Agarico- and Pezizomycotina, consistent with the hypothesis that the coding capacity of ancestral fungal genomes might have promoted the repeated evolution of complex multicellularity. We interpret this repertoire as an indication of evolutionary predisposition of fungal ancestors for evolving complex multicellular fruiting bodies. Our work suggests that evolutionary convergence may happen not only when organisms are closely related or are under similar selection pressures, but also when ancestral genomic repertoires render certain evolutionary trajectories more likely than others, even across large phylogenetic distances.

We acknowledge inspiring discussions of this topic in the Fungal Genomics and Evolution Laboratory (Szeged, Hungary). We are thankful to Marin Talbot Brewer, Gunther Doehlemann, and Jon Magnuson for permission to utilize unpublished genomic data of Exobasidiummaculosum, Exobasidium vaccinii, and Melanotaenium endogenum, respectively. This work was supported by the "Momentum" program of the Hungarian Academy of Sciences (contract no. LP2014/12 to L.G.N.) and the European Research Council (grant no. 758161 to L.G.N.); GINOP-2.3.2-15-2016- 00052 (to L.G.N.), "Frontline" Research Excellence Programme of the National Research, Development and Innovation Office, Hungary (KKP-129814 to B.P.), GINOP-2.3.2-15-2016- 00026 (iChamber to B.P.), The European Union's Horizon 2020 research and innovation program under Grant Agreement No. 739593 (to B.P.), and National Science Foundation IOS 1457044 and IOS 1916137 (to J.P.T.).

Except where otherwise noted, this item's license is described as This is an Open Access article distributed under the terms of the Creative Commons Attribution Non-Commercial License (http:// creativecommons.org/licenses/by-nc/4.0/), which permits non-commercial re-use, distribution, and reproduction in any medium, provided the original work is properly cited