Projected Changes in Photosynthetic Picoplankton in a Warmer Subtropical Ocean 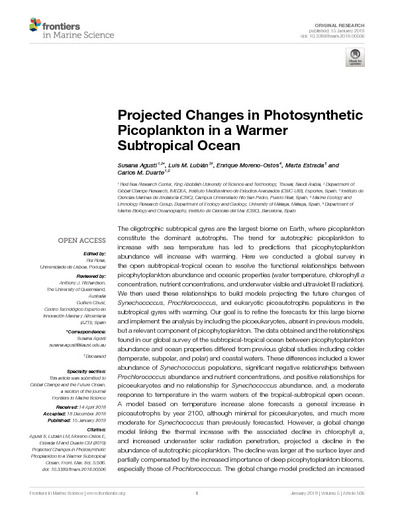 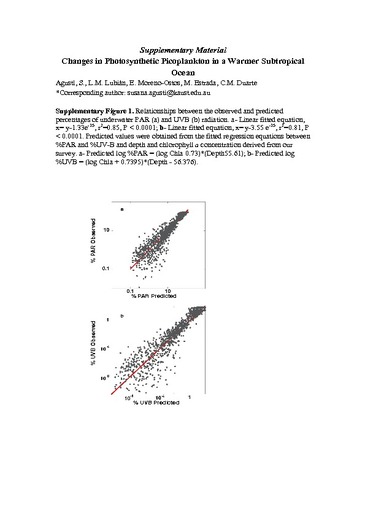 The oligotrophic subtropical gyres are the largest biome on Earth, where picoplankton constitute the dominant autotrophs. The trend for autotrophic picoplankton to increase with sea temperature has led to predictions that picophytoplankton abundance will increase with warming. Here we conducted a global survey in the open subtropical-tropical ocean to resolve the functional relationships between picophytoplankton abundance and oceanic properties (water temperature, chlorophyll a concentration, nutrient concentrations, and underwater visible and ultraviolet B radiation). We then used these relationships to build models projecting the future changes of Synechococcus, Prochlorococcus, and eukaryotic picoautotrophs populations in the subtropical gyres with warming. Our goal is to refine the forecasts for this large biome and implement the analysis by including the picoeukaryotes, absent in previous models, but a relevant component of picophytoplankton. The data obtained and the relationships found in our global survey of the subtropical-tropical ocean between picophytoplankton abundance and ocean properties differed from previous global studies including colder (temperate, subpolar, and polar) and coastal waters. These differences included a lower abundance of Synechococcus populations, significant negative relationships between Prochlorococcus abundance and nutrient concentrations, and positive relationships for picoeukaryotes and no relationship for Synechococcus abundance, and, a moderate response to temperature in the warm waters of the tropical-subtropical open ocean. A model based on temperature increase alone forecasts a general increase in picoautotrophs by year 2100, although minimal for picoeukaryotes, and much more moderate for Synechococcus than previously forecasted. However, a global change model linking the thermal increase with the associated decline in chlorophyll a, and increased underwater solar radiation penetration, projected a decline in the abundance of autotrophic picoplankton. The decline was larger at the surface layer and partially compensated by the increased importance of deep picophytoplankton blooms, especially those of Prochlorococcus. The global change model predicted an increased dominance of Prochlorococcus sp. in the subtropical-tropical ocean with future warming. Our results, based on current patterns of picophytoplankton distribution, help improve existing projections by considering feedbacks affecting picophytoplankton abundance in the future subtropical and tropical ocean, the larger biome on Earth.

This research is a contribution to the Malaspina Expedition 2010 project, funded by the CONSOLIDER Ingenio 2010 programme of the Spanish Ministry of Science and Competitiveness (CSD2008-00077). Also funded by SA's baseline BAS/1/1072-01-01 KAUST fund. We thank the UTM personnel and the scientist on board the Malaspina expedition, for help with sampling and data analysis of CTD, and nutrients, and the BIO Hesperides crew for their professional help during the cruises. We are grateful to M. de Oca for flow cytometry acquisitions during legs 1, 3, and 5, and to Moira Llabres for data analysis.