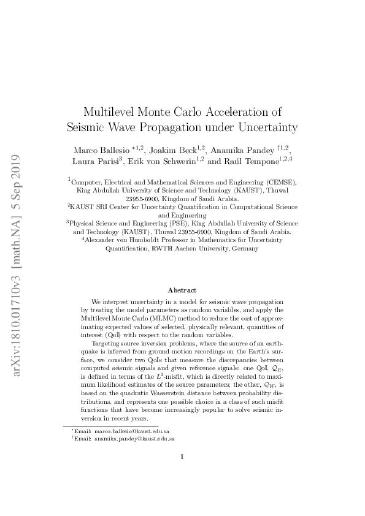 We interpret uncertainty in a model for seismic wave propagation by treating the model parameters as random variables, and apply the Multilevel Monte Carlo method to reduce the cost of approximating expected values of selected, physically relevant, quantities of interest (QoI) with respect to the random variables. Targeting source inversion problems, where the source of an earthquake is inferred from ground motion recordings on the Earth’s surface, we consider two QoIs that measure the discrepancies between computed seismic signals and given reference signals: one QoI, QE , is defined in terms of the L2 -misfit, which is directly related to maximum likelihood estimates of the source parameters; the other, QW , is based on the quadratic Wasserstein distance between probability distributions, and represents one possible choice in a class of such misfit functions that have become increasingly popular to solve seismic inversion in recent years. We simulate seismic wave propagation, including seismic attenuation, using a publicly available code in widespread use, based on the spectral element method. Using random coefficients and deterministic initial and boundary data, we present benchmark numerical experiments with synthetic data in a two-dimensional physical domain and a one-dimensional velocity model where the assumed parameter uncertainty is motivated by realistic Earth models. Here, the computational cost of the standard Monte Carlo method was reduced by up to 97% for QE , and up to 78% for QW , using a relevant range of tolerances. Shifting to three-dimensional domains is straight-forward and will further increase the relative computational work reduction.

The authors are grateful to Prof. Martin Mai and Dr. Olaf Zielke, Dr. Luis F.R. Espath and Dr. Håkon Hoel, Prof. Mohammad Motamed and Prof. Daniel Appelö, and Prof. Jesper Oppelstrup for valuable discussions and comments. We are grateful for the support provided by Dr. Samuel Kortas, Computational Scientist, High Performance Computing, KAUST. In particular, we are using the job-scheduler extension decimate 0.9.5 (Kortas 2018), developed by Dr. Kortas. We would also like to acknowledge the use of the open source software package SPECFEM2D (Komatitsch et al. 2012), provided by Computational Infrastructure for Geodynamics (http://geodynamics.org) which is funded by the National Science Foundation under awards EAR-0949446 and EAR-1550901. M. Ballesio, J. Beck, A. Pandey, E. von Schwerin, and R. Tempone are members of the KAUST SRI Center for Uncertainty Quantification in Computational Science and Engineering.