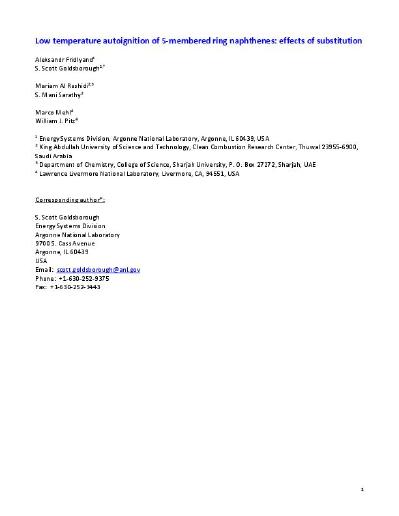 The development and design of future internal combustion engines requires fundamental understanding and the capability to model the autoignition and pollutant formation behavior of petroleum-based and other fuels. Naphthenes are an important constituent of gasoline, and they can comprise larger portions of unconventionally-derived gasoline. There is a lack of data and validated models for 5-membered ring naphthenes. In this work, the autoignition characteristics of cyclopentane, and two of its substituted analogues, methylcyclopentane, and ethylcyclopentane are investigated using a twin-piston rapid compression machine. Each fuel is studied at engine-representative conditions: 20, 50 bar and 700–980 K, with mixtures containing stoichiometric fuel/oxygen ratios at various extents of dilution with inert gases. Negative temperature coefficient (NTC) behavior is observed for cyclopentane, though first-stage ignition and associated low temperature heat release behavior are only evident at temperatures below that for the transition to NTC. Pressure is found to have a larger impact on the reactivity than oxygen dilution, with both effects amplified in the NTC region. The cyclopentane experiments in this study are challenged by the sensitivity of this molecule to non-uniform, or mild ignition phenomena within the NTC region. The addition of saturated sidechains in methyl- and ethylcyclopentane significantly increases the reactivity of the molecules, especially at low temperature and NTC conditions. At the highest temperatures though, there is little difference between the three naphthenes. Typical two-stage ignition behavior is observed across a wide range of temperatures for these alkyl cyclopentanes with no mild ignition observed within the NTC region. A recently developed model for cyclopentane is extended to include reactions for methylcyclopentane, and this is used to simulate the new experiments. The simulation results indicate that low temperature reactivity of cyclopentane is dominated by HO2 elimination of the RO2 species producing cyclopentene, and this inhibits autoignition since it is a very stable molecule. When a methyl group is substituted on the ring, additional RO2 isomerization pathways are available, and these substantially increase the fuel reactivity. HO2 elimination is also important with methylcyclopentane, and this leads to significant production of cyclic olefins which can further react to produce diolefins. These findings are consistent with observations that have been made in other experimental apparatuses.

The submitted manuscript has been created in part by UChicago Argonne, LLC, Operator of Argonne National Laboratory (“Argonne”). Argonne, a U.S. Department of Energy Office of Science laboratory, is operated under Contract no. DE-AC02-06CH11357. The U.S. Government retains for itself, and others acting on its behalf, a paid-up nonexclusive, irrevocable worldwide license in said article to reproduce, prepare derivative works, distribute copies to the public, and perform publicly and display publicly, by or on behalf of the Government. The Department of Energy will provide public access to these results of federally sponsored research in accordance with the DOE Public Access Plan. http://energy.gov/downloads/doe-public-access-plan. This work is performed under the auspices of the Office of Energy Efficiency and Renewable Energy, Office of Vehicle Technology, U.S. Department of Energy, under contract number DE-AC02-06CH11357. KAUST CCRC is grateful to Saudi Aramco for sponsoring this research under the FUELCOM program, and the Office of Sponsored Research (OSR) at KAUST under Award no. OSR-2016-CRG5-3022. The work at LLNL is supported by the U.S. Department of Energy, Vehicle Technologies Office (program managers Gurpreet Singh and Leo Breton) and performed under the auspices of the U.S. Department of Energy by Lawrence Livermore National Laboratory under Contract DE-AC52-07NA27344. The authors acknowledge the assistance of Jeffrey Santner and Toby Rockstroh for their efforts to maintain and operate ANL’s tpRCM, Robert Tranter at ANL for helpful discussions, and Dr. Samah Mohamed and Mr. Tony Bissoonauth (KAUST) for help with the kinetic modeling.

Except where otherwise noted, this item's license is described as NOTICE: this is the author’s version of a work that was accepted for publication in Combustion and Flame. Changes resulting from the publishing process, such as peer review, editing, corrections, structural formatting, and other quality control mechanisms may not be reflected in this document. Changes may have been made to this work since it was submitted for publication. A definitive version was subsequently published in Combustion and Flame, [, , (2018-12-31)] DOI: 10.1016/j.combustflame.2018.10.028 . © 2018. This manuscript version is made available under the CC-BY-NC-ND 4.0 license http://creativecommons.org/licenses/by-nc-nd/4.0/