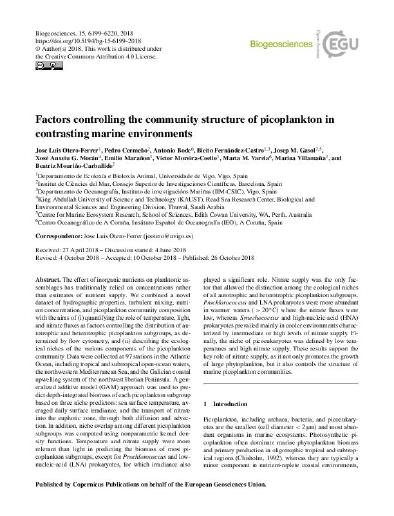 The effect of inorganic nutrients on planktonic assemblages has traditionally relied on concentrations rather than estimates of nutrient supply. We combined a novel dataset of hydrographic properties, turbulent mixing, nutrient concentration, and picoplankton community composition with the aims of (i) quantifying the role of temperature, light, and nitrate fluxes as factors controlling the distribution of autotrophic and heterotrophic picoplankton subgroups, as determined by flow cytometry, and (ii) describing the ecological niches of the various components of the picoplankton community. Data were collected at 97 stations in the Atlantic Ocean, including tropical and subtropical open-ocean waters, the northwestern Mediterranean Sea, and the Galician coastal upwelling system of the northwest Iberian Peninsula. A generalized additive model (GAM) approach was used to predict depth-integrated biomass of each picoplankton subgroup based on three niche predictors: sea surface temperature, averaged daily surface irradiance, and the transport of nitrate into the euphotic zone, through both diffusion and advection. In addition, niche overlap among different picoplankton subgroups was computed using nonparametric kernel density functions. Temperature and nitrate supply were more relevant than light in predicting the biomass of most picoplankton subgroups, except for Prochlorococcus and low-nucleic-acid (LNA) prokaryotes, for which irradiance also played a significant role. Nitrate supply was the only factor that allowed the distinction among the ecological niches of all autotrophic and heterotrophic picoplankton subgroups. Prochlorococcus and LNA prokaryotes were more abundant in warmer waters (> 20°C) where the nitrate fluxes were low, whereas Synechococcus and high-nucleic-acid (HNA) prokaryotes prevailed mainly in cooler environments characterized by intermediate or high levels of nitrate supply. Finally, the niche of picoeukaryotes was defined by low temperatures and high nitrate supply. These results support the key role of nitrate supply, as it not only promotes the growth of large phytoplankton, but it also controls the structure of marine picoplankton communities.

We thank the officers and crew of the research vessels Hespérides, Sarmiento de Gamboa, Mytilus, Ramon Margalef and Lura for their help during the cruises. We are also very grateful to Fátima Eiroa for the flow cytometry analysis in the NICANOR, HERCULES1, HERCULES2, HERCULES3, and ASIMUTH cruises. Finally, we would like to thank Julia Uitz and the two anonymous reviewers for their valuable comments on the paper. This research was supported by the Spanish Ministry of Economy and Competitiveness (MINECO) through projects CTM2012-30680 to Beatriz Mouriño, CTM2008-0626I-C03-01 to Mikel Latasa, REN2003-09532-C03-01 to Ramiro Varela Benvenuto, CTM2004-05174-C02 to Emilio Marañón, and CTM2011-25035 to Pedro Cermeño; by the Galician government through grants 09MMA027604PR to Manuel Ruiz Villareal and EM2013/021 to Beatriz Mouriño; by the Instituto Español de Oceanografia (IEO) through the time series project RADIALES coordinated by Antonio Bode and by the 7th Framework Programme of the European Commission through grant FP7 SPACE.2010.1.1-01 261860 to Manuel Ruiz Villareal. Jose Luis Otero Ferrer acknowledges the receipt of a FPI contract from MINECO (CTM2012-30680) and Bieito Fernádez Castro a Juan de La Cierva Formación fellowship (FJCI-641 2015-25712, Ministerio de Economía y Competitividad, Spanish government).