Weak population structure of the Spot-tail shark Carcharhinus sorrah\n and the Blacktip shark C. limbatus\n along the coasts of the Arabian Peninsula, Pakistan, and South Africa 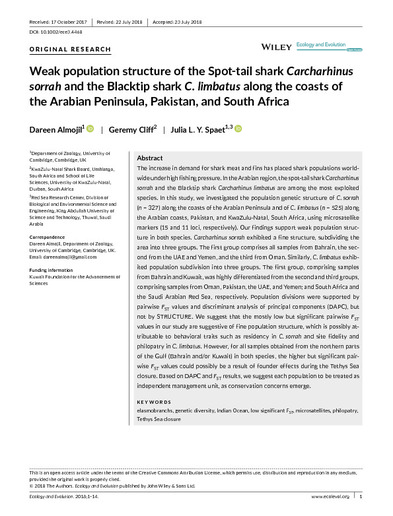 The increase in demand for shark meat and fins has placed shark populations worldwide under high fishing pressure. In the Arabian region, the spot-tail shark Carcharhinus sorrah and the Blacktip shark Carcharhinus limbatus are among the most exploited species. In this study, we investigated the population genetic structure of C. sorrah (n = 327) along the coasts of the Arabian Peninsula and of C. limbatus (n = 525) along the Arabian coasts, Pakistan, and KwaZulu-Natal, South Africa, using microsatellite markers (15 and 11 loci, respectively). Our findings support weak population structure in both species. Carcharhinus sorrah exhibited a fine structure, subdividing the area into three groups. The first group comprises all samples from Bahrain, the second from the UAE and Yemen, and the third from Oman. Similarly, C. limbatus exhibited population subdivision into three groups. The first group, comprising samples from Bahrain and Kuwait, was highly differentiated from the second and third groups, comprising samples from Oman, Pakistan, the UAE, and Yemen; and South Africa and the Saudi Arabian Red Sea, respectively. Population divisions were supported by pairwise FST values and discriminant analysis of principal components (DAPC), but not by STRUCTURE. We suggest that the mostly low but significant pairwise FST values in our study are suggestive of fine population structure, which is possibly attributable to behavioral traits such as residency in C. sorrah and site fidelity and philopatry in C. limbatus. However, for all samples obtained from the northern parts of the Gulf (Bahrain and/or Kuwait) in both species, the higher but significant pairwise FST values could possibly be a result of founder effects during the Tethys Sea closure. Based on DAPC and FST results, we suggest each population to be treated as independent management unit, as conservation concerns emerge.

This work was undertaken with the financial support from Kuwait Foundation for the Advancement of Science (KFAS), whose assistance we gratefully acknowledge. We are very thankful to all the fishermen that we have interacted with. We are mostly grateful to Mr Yaslam Saed (Ministry of Fish Wealth, Yemen) for making the sampling process at Yemen easier than expected, even in a state of war. We would also like to thank Mr Lateef and Mr Mohammed Belal (Deira fish market, the UAE), Mr Akbar Bhai (Pakistan), Mr. Mohammad Yusur (Socotra, Yemen), and Mr Bo Khalid (Oman) for their valuable guidance and advise on sampling local fish markets and landing sites. We thank Operations and Research staff of the KZN Sharks Board for the provision of blacktip sharks and the collection of tissue samples. Lastly, we would like to pass a special thank you to two anonymous reviewers for their insightful and constructive comments, which significantly improved the manuscript.