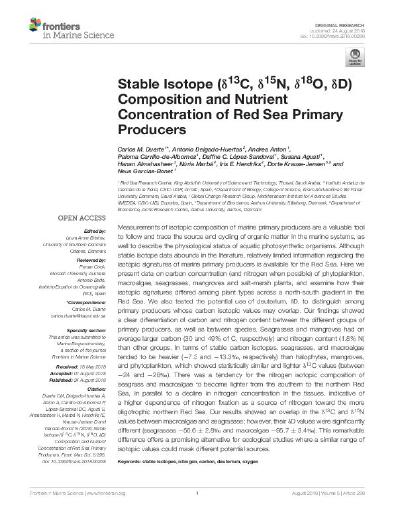 Measurements of isotopic composition of marine primary producers are a valuable tool to follow and trace the source and cycling of organic matter in the marine systems, as well to describe the physiological status of aquatic photosynthetic organisms. Although stable isotope data abounds in the literature, relatively limited information regarding the isotopic signatures of marine primary producers is available for the Red Sea. Here we present data on carbon concentration (and nitrogen when possible) of phytoplankton, macroalgae, seagrasses, mangroves and salt-marsh plants, and examine how their isotopic signatures differed among plant types across a north-south gradient in the Red Sea. We also tested the potential use of deuterium, δD, to distinguish among primary producers whose carbon isotopic values may overlap. Our findings showed a clear differentiation of carbon and nitrogen content between the different groups of primary producers, as well as between species. Seagrasses and mangroves had on average larger carbon (30 and 49% of C, respectively) and nitrogen content (1.8% N) than other groups. In terms of stable carbon isotopes, seagrasses, and macroalgae tended to be heavier (−7.3 and −13.3%0, respectively) than halophytes, mangroves, and phytoplankton, which showed statistically similar and lighter δ13C values (between −24 and −26%0). There was a tendency for the nitrogen isotopic composition of seagrass and macroalgae to become lighter from the southern to the northern Red Sea, in parallel to a decline in nitrogen concentration in the tissues, indicative of a higher dependence of nitrogen fixation as a source of nitrogen toward the more oligotrophic northern Red Sea. Our results showed an overlap in the δ13C and δ15N values between macroalgae and seagrasses; however, their δD values were significantly different (seagrasses −56.6 ± 2.8%0 and macroalgae −95.7 ± 3.4%0). This remarkable difference offers a promising alternative for ecological studies where a similar range of isotopic values could mask different potential sources.

This research was funded by King Abdullah University of Science and Technology through base-line funding to CD and SA, with references BAS/1/1071-01-01 and BAS/1/1072-01-01, and CCF funding to CD. IH was supported by a Ramon y Cajal Fellowship RYC2014-14970, cofounded by the Conselleria d'Innovació, Recerca i Turisme of the Balearic Government (Pla de ciència, tecnologia, innovació i emprenedoria 2013-2017) and the Spanish Ministry of Economy, Industry, and Competitiveness.