DNA methylation as a mediator of HLA-DRB1*15:01 and a protective variant in multiple sclerosis 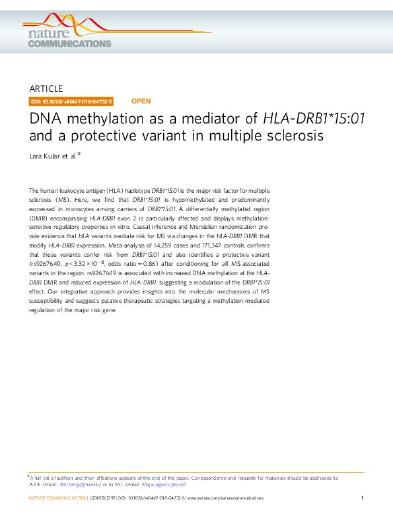 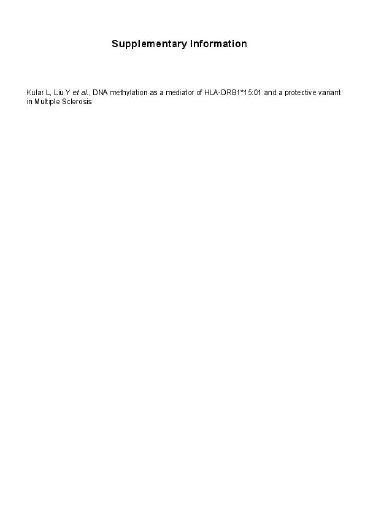 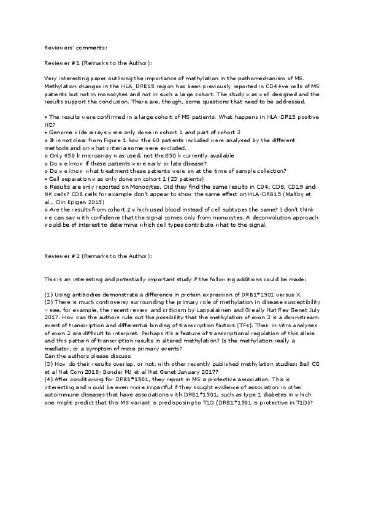 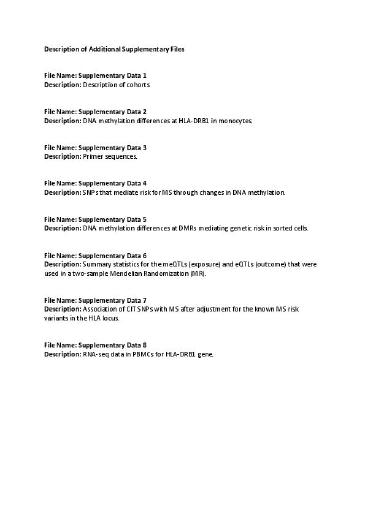 The human leukocyte antigen (HLA) haplotype DRB1 15:01 is the major risk factor for multiple sclerosis (MS). Here, we find that DRB1 15:01 is hypomethylated and predominantly expressed in monocytes among carriers of DRB1 15:01. A differentially methylated region (DMR) encompassing HLA-DRB1 exon 2 is particularly affected and displays methylation-sensitive regulatory properties in vitro. Causal inference and Mendelian randomization provide evidence that HLA variants mediate risk for MS via changes in the HLA-DRB1 DMR that modify HLA-DRB1 expression. Meta-analysis of 14,259 cases and 171,347 controls confirms that these variants confer risk from DRB1 15:01 and also identifies a protective variant (rs9267649, p < 3.32 × 10, odds ratio = 0.86) after conditioning for all MS-associated variants in the region. rs9267649 is associated with increased DNA methylation at the HLA-DRB1 DMR and reduced expression of HLA-DRB1, suggesting a modulation of the DRB1 15:01 effect. Our integrative approach provides insights into the molecular mechanisms of MS susceptibility and suggests putative therapeutic strategies targeting a methylation-mediated regulation of the major risk gene.

This work was supported by grants from the Swedish Research Council, the Swedish Association for Persons with Neurological Disabilities, the Swedish Brain Foundation, the Swedish MS Foundation, Petrus and Augusta Hedlunds Foundation, the Swedish AFA Insurance, Knut and Alice Wallenberg Foundation, the Stockholm County Council (ALF project), and AstraZeneca (AstraZeneca-Science for Life Laboratory collaboration). A.P.F. received grant support from NIH (DP1 ES022579). L.K. was supported by fellowship from the Margaretha af Ugglas Foundation. D.G.-C. and J.T. were supported by EU FP7 306000 STATegra. Y.L. was supported in part by the National Natural Science Foundation (grant no. 31471212). We acknowledge the International Multiple Sclerosis Genetics Consortium (IMSGC) for providing SNP genotypes used in this study and BEA core facility (Karolinska Institutet) for processing 450K array data on monocytes. The computations were performed on resources provided by SNIC through Uppsala Multidisciplinary Center for Advanced Computational Science (UPPMAX). The Norwegian MS Registry and Biobank and the MS research group in Oslo are acknowledged for access to data from Norwegian MS patients. B.H. was supported by the German research foundation in the framework of the Collaborative research group TR128, the German MS competence network, and the EU project MultipleMS. This work was supported by the German Ministry for Education and Research (BMBF) as part of the “German Competence Network Multiple Sclerosis” (KKNMS) (grant nos. 01GI0916 and 01GI0917). F.Z., H.W., and R.G. were supported by the German research foundation in the framework of the Collaborative research group TR128, the German MS competence network. The KORA study was initiated and financed by the Helmholtz Zentrum München-German Research Center for Environmental Health, which is funded by the BMBF and by the State of Bavaria. Furthermore, KORA research was supported within the Munich Center of Health Sciences (MC-Health), Ludwig-Maximilians-Universität, as part of LMUinnovativ. The collection of probands in the Heinz Nixdorf RECALL Study (HNR) (PIs: K.-H. Jöckel, R. Erbel) was supported by the Heinz Nixdorf Foundation. The genotyping of HNR probands was financed through a grant of the BMBF to M. M. Nöthen. The Dortmund Health Study was supported by the German Migraine and Headache Society (DMKG) and unrestricted grants of equal share from Almirall, AstraZeneca, Berlin-Chemie, Boehringer, Boots Healthcare, GlaxoSmithKline (GSK), Janssen-Cilag, McNeil Pharma, Merck Sharp & Dohme (MSD), and Pfizer to the University of Münster. Blood collection was done through funds from the Institute of Epidemiology and Social Medicine, University of Münster (K. Berger and J. Wellmann), genotyping was supported by the BMBF (grant no. 01ER0816). SHIP is part of the Community Medicine Research Network of the University Medicine Greifswald, Germany (www.community-medicine.de), which was initiated and funded by the BMBF (grants no. 01ZZ9603, 01ZZ0103, and 01ZZ0403), the Ministry of Cultural Affairs and the Social Ministry of the Federal State of Mecklenburg-West Pomerania; genome-wide data have been supported by the BMBF (grant no. 03ZIK012). The FoCus study was supported by the BMBF (grant no. 0315540A).