Polyethylene-based Polymers: Synthesis and Characteriization and Self Assembly 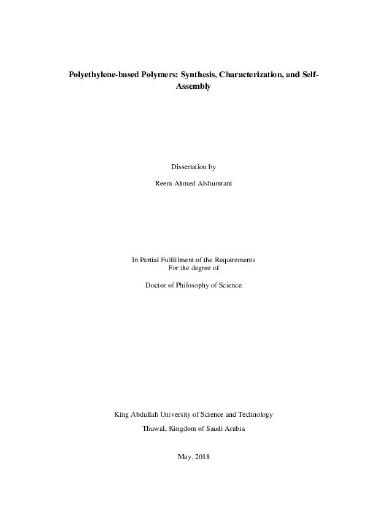 In the first Chapter, Polyhomologation, a powerful technique to synthesize well-defined, perfectly linear, polyethylenes with controllable molecular weight, topology and low polydispersity, is presented in the first Chapter. In this Chapter is also discussed the combination of polyhomologation with other polymerization techniques such as Ring Opening Polymerization, ROP, Atom Transfer Radical Polymerization, ATRP, as well as with chlorosilane linking chemistry towards well-defined polyethylene-based macromolecular architectures. In the second Chapter, α,ω-dihydroxy-polyethylene was synthesized by the polyhomologation of dimethylsulfoxonium methylide with 9-thexyl-9-BBN (9-BNN: 9-borabicyclo[3.3.1]nonane), a novel difunctional initiator produced from 9-BBN and 2,3-dimethylbut-2-ene with two active and one blocked sites, followed by hydrolysis/oxidation. The terminal hydroxy groups were used either directly as initiators, in the presence of 1-tertbutyl-2,2,4,4,4-pentakis(dimethylamino)-2λ5,4λ5-catenadi(phosphazene) (t-BuP2), for the ring opening polymerization of ε-caprolactone, ε-CL, in order to afford polycaprolactone-b-polyethylene-b-polycaprolactone (PCL-b-PE-b-PCL) or after transformation to ATRP initiating sites in order to polymerize styrene and produce polystyrene-b-polyethylene-b-polystyrene (PSt-b-PE-b-PSt) triblock copolymers. Molecular characterization by 11B, 13C and 1H NMR as well as FTIR, and high-temperature GPC (HT-GPC) confirmed the well-defined nature of the synthesized new difunctional initiator and triblock copolymers. Differential scanning calorimetry was used to determine the melting points and degree of crystallinity of PE and PCL. In the third Chapter, a novel triallylborane initiator was synthesized and used to afford α-allyl-ω-hydroxy-polyethylene by polyhomologation of dimethylsulfoxonium methylide. The α-allyl-ω-hydroxy-polyethylene was then used as a macroinitiator (OH group) for the ROP of ε-CL and LLA to afford well-defined triblock terpolymer of polylactide-b-polyethylene-b-polycaprolactone (PLLA-b-PE-b-PCL). The characterization of all intermediate and final products by 1H NMR, FTIR, and HT-GPC, verified the well-defined nature of the triblock terpolymer. In the fourth Chapter, polyethylene (PE)-based 3- and 4-miktoarm star [PE(PCL)2, PE(PCL)3], as well as H-type [(PCL)2PE(PCL)2] block copolymers (PCL: polycaprolactone), were synthesized by combining polyhomologation, chlorosilane chemistry, and Ring Opening Polymerization (ROP). For the synthesis of miktoarm stars, a hydroxyl-terminated PE-OH, prepared by polyhomologation of dimethylsulfoxonium methylide with a monofunctional boron initiator, reacted with either chloromethyl(methyl)dimethoxysilane or chloromethyltrimethoxysilane. After the hydrolysis of the methoxysilane groups, the produced difunctional or trifunctional macroinitiators were used for the ROP of ε-caprolactone, in the presence of 1-tert-butyl-2,2,4,4,4-pentakis(dimethylamino)-2λ5,4λ5-catenadi(phosphazene)(t-BuP2). The H-type block copolymers were synthesized using the same strategy but with a difunctional polyhomologation initiator. All intermediates and final products were characterized by HT-GPC, 1H NMR, and FTIR analysis. The thermal properties of the PE precursors and final products were studied by DSC and TGA. In the fifth Chapter, the self-assembly properties of the amphiphilic linear block copolymer PE-b-PCL and 3-miktoarm star copolymers (PE-b-PCL2) were studied in THF, a selective solvent for PCL, by Dynamic Light Scattering (DLS), Transmission Electron Microscopy (TEM) and Atomic Force Microscope (AFM). All the above findings presented in this dissertation emphasize the utility of polyhomologation for the synthesis of well-defined polyethylene-based complex macromolecular architectures, which is practically impossible through another kind of polymerization, including the catalytic polymerization of ethylene. In the sixth Chapter, the summary of the thesis and some consideration on the subjects of future work are given.