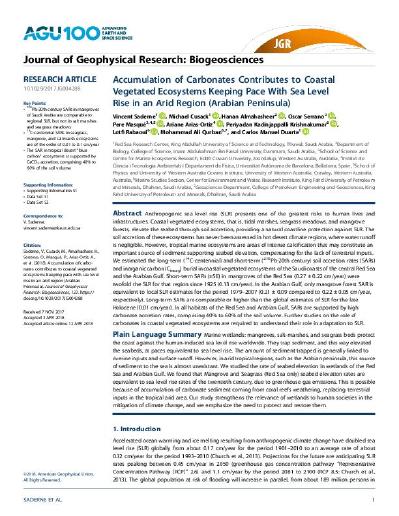 Anthropogenic sea level rise (SLR) presents one of the greatest risks to human lives and infrastructures. Coastal vegetated ecosystems, that is, tidal marshes, seagrass meadows, and mangrove forests, elevate the seabed through soil accretion, providing a natural coastline protection against SLR. The soil accretion of these ecosystems has never been assessed in hot desert climate regions, where water runoff is negligible. However, tropical marine ecosystems are areas of intense calcification that may constitute an important source of sediment supporting seabed elevation, compensating for the lack of terrestrial inputs. We estimated the long-term (C-centennial) and short-term (Pb-20th century) soil accretion rates (SARs) and inorganic carbon (C) burial in coastal vegetated ecosystems of the Saudi coasts of the central Red Sea and the Arabian Gulf. Short-term SARs (±SE) in mangroves of the Red Sea (0.27 ± 0.22 cm/year) were twofold the SLR for that region since 1925 (0.13 cm/year). In the Arabian Gulf, only mangrove forest SAR is equivalent to local SLR estimates for the period 1979-2007 (0.21 ± 0.09 compared to 0.22 ± 0.05 cm/year, respectively). Long-term SARs are comparable or higher than the global estimates of SLR for the late Holocene (0.01 cm/year). In all habitats of the Red Sea and Arabian Gulf, SARs are supported by high carbonate accretion rates, comprising 40% to 60% of the soil volume. Further studies on the role of carbonates in coastal vegetated ecosystems are required to understand their role in adaptation to SLR.

This research was supported by a project funded by Saudi Aramco and baseline funding from King Abdullah University of Science and Technology (KAUST). O. S. was supported by an ARC DECRA (DE170101524). Funding was provided to PM by the Generalitat de Catalunya (grant 2014 SGR-1356) and an Australian Research Council LIEF Project (LE170100219). AAO was supported by a PhD scholarship from Obra Social “LaCaixa”. This work is contributing to the ICTA ‘Unit of Excellence’ (MinECo, MDM2015-0552). We thank A. Qasem and P. Priahartato, Saudi Aramco, for support and advice on sampling design; R. Lindo, R. Magalles, P. Bacquiran, S. Ibrahim, and M. Lopez, at the Marine Studies section of the Center for Environment and Water of King Fahd University of Petroleum and Minerals; and Z. Batang and staff from the Coastal and Marine Resources core lab at KAUST for help with sampling. We thank I. Schulz, N. Geraldi, K. Rowe, S. Roth, M. Ennasri, D. Prabowo, and I. Mendia for help with laboratory analyses. We wish to thank the two anonymous reviewers, as well as Editor in chief M. Goni, for their precious comments/suggestions for the improvement of the manuscript. The data sets, including 14C and 210Pb data, CaCO3 concentration values, porosities, and CaCO3 depth profiles for all cores, are available in the open repository Pangaea (Saderne et al., 2018; https://doi.pangaea.de/10.1594/PANGAEA.887043).