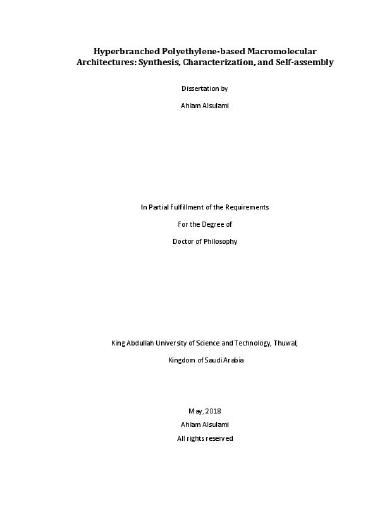 "Chain walking” catalytic polymerization CWCP is a powerful tool for the one-pot synthesis of a unique class of hyperbranched polyethylene HBPE-based macromolecules with a controllable molecular weight, topology, and composition. This dissertation focuses on new synthetic routes to prepare HBPE-based macromolecular architectures by combining the CWCP technique with ring opening polymerization ROP, atom–transfer radical polymerization ATRP, and “click” chemistry. Taking advantage of end-functionalized HBPE, and a new ethynyl-soketal star-shape agent, we were able to synthesize different types of the HBPE-based architectures including hyperbranched-on-hyperbranched core-shell nanostructure, and miktoarm-star-HBPE-based block copolymers. The first part of the dissertation provides a general introduction to the synthesis of polyethylene types with controllable structures. Well-defined polyethylene with different macromolecule architectures were synthesized either for academic or industrial purposes. In the second part, the HBPE with different topologies was synthesized by CWCP, using a α-diimine Pd (II) catalyst. The effect of the temperature and pressure on the catalyst activity and polymer properties, including branch content, molecular weight, distribution, and thermal properties were studied. Two series of samples were synthesized: a) serial samples (A) under pressures of 1, 5, and 27 atm at 5˚C, and b) serial samples (B) at temperatures of 5, 15, and 35 ˚C under 5 atm. Proton nuclear magnetic resonance spectroscopy, 1H NMR, and gel permeation chromatography, GPC, analysis were used to calculate the branching content, molecular weight, and distribution, whereas differential scanning calorimetry, DSC, was used to record the melting and glass transition temperatures as well as the degree of the crystallinity. Well-defined HBPE-based core diblock copolymers with predictable amphiphilic properties are studied in the third part of the project. Hyperbranched polyethylene-b-poly(N-isopropylacrylamide), HBPE-b-PNIPAM, and hyperbranched polyethylene-b-poly(solketal acrylate), HBPE-b-PSA, were successfully synthesized by combining CWCP and ATRP. The synthetic methodology includes the following steps; a) synthesis of multifunction hyperbranched polyethylene initiators HBPE-MI by direct copolymerization of ethylene with 2-(2-bromoisobutyryloxy)ethyl acrylate BIEA in the presence of a α-diimine Pd(II) catalyst, and b) HBPE-MI with α-bromoester groups used as initiation sites for ATRP. Proton nuclear magnetic resonance spectroscopy, 1H NMR, gel permeation chromatography,GPC, and Fourier transform infrared, FT-IR, spectroscopy, were used for determining the molecular and composition structures. Also, differential scanning calorimetry, DSC, and thermogravimetric analysis, TGA, were used to record the melting temperature and to study the thermal stability, respectively. In the fourth part, a well-defined 3-miktoarm star copolymer 3μ-HBPE(PCL)2 (HBPE: hyperbranched polyethylene, PCL: poly(ε-caprolactone) was synthesized by combining CWCP, ring opening polymerization, ROP, and “click” chemistry. The synthetic methodology includes the following steps: a) synthesis of azido-functionalized hyperbranched polyethylene HBPE-N3 by CWCP of ethylene with the α-diimine Pd(II) catalyst, followed by quenching with an excess of 4-vinylbenzyl chloride and transformation of –Cl to the azido group with sodium azide, b) synthesis of in-chain ethynyl-functionalized poly(ε-caprolactone), (PCL)2-C≡CH by ROP of ε-CL with ethynylfunctionalized solketal [3-(prop-2-yn-1-yloxy) propane-1,2-diol] as a bifunctional initiator, in the presence of P2-t-Bu phosphazene super base, and c) “clicking” HBPE-N3 and (PCL)2-C≡CH using the copper(I)-catalyzed alkyne–azide cycloaddition CuAAC. Proton nuclear magnetic resonance spectroscopy, 1H NMR, gel permeation chromatography, GPC, and Fourier transform infrared, FT-IR, spectroscopy, were used to determine the molecular and composition structures. Also, the differential scanning calorimetry, DSC, was used to record the melting point temperature. The fifth part illustrates the self-assembly behavior of the HBPE-based block copolymers of poly(N-isopropylacrylamide), NIPAM, and poly(ε-caprolactone), PCL, at room temperature in water and a petroleum ether-selective solvent for NIPAM and PCL respectively. The synthesized copolymers HBPE-b-NIPAM and 3μ-HBPE(PCL)2 revealed either core-shell nanostructure in vesicles or worms and worm-likes branches, as confirmed by combining the analysis of dynamic light scattering, DLS, transmission electron microscopy, TEM, and atomic force spectroscopy, AFM. All the findings presented in this dissertation emphasize the utility of "living" CWCP to synthesize end-functionalized HBPE, and new star-linkage HBPE-based complex architectures. The summary and future works concerning predictable properties and applications are discussed in the sixth part.