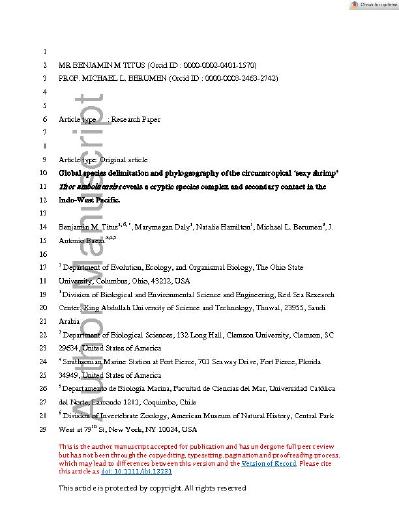 Aim The “sexy shrimp” Thor amboinensis is currently considered a single circumtropical species. However, the tropical oceans are partitioned by hard and soft barriers to dispersal, providing ample opportunity for allopatric speciation. Herein, we test the null hypothesis that T. amboinensis is a single global species, reconstruct its global biogeographical history, and comment on population-level patterns throughout the Tropical Western Atlantic. Location Coral reefs in all tropical oceans. Methods Specimens of Thor amboinensis were obtained through field collection and museum holdings. We used one mitochondrial (COI) and two nuclear (NaK, enolase) gene fragments for global species delimitation and phylogenetic analyses (n = 83 individuals, 30 sample localities), while phylogeographical reconstruction in the TWA was based on COI only (n = 303 individuals, 10 sample localities). Results We found evidence for at least five cryptic lineages (9%–22% COI pairwise sequence divergence): four in the Indo-West Pacific and one in the Tropical Western Atlantic. Phylogenetic reconstruction revealed that endemic lineages from Japan and the South Central Pacific are more closely related to the Tropical Western Atlantic lineage than to a co-occurring lineage that is widespread throughout the Indo-West Pacific. Concatenated and species tree phylogenetic analyses differ in the placement of an endemic Red Sea lineage and suggest alternate dispersal pathways into the Atlantic. Phylogeographical reconstruction throughout the Tropical Western Atlantic reveals little genetic structure over more than 3,000 km. Main conclusions Thor amboinensis is a species complex that has undergone a series of allopatric speciation events and whose members are in secondary contact in the Indo-West Pacific. Nuclear- and mitochondrial- gene phylogenies show evidence of introgression between lineages inferred to have been separated more than 20 Ma. Phylogenetic discordance between multi-locus analyses suggest that T. amboinensis originated in the Tethys sea and dispersed into the Atlantic and Indo-West Pacific through the Tethys seaway or, alternatively, originated in the Indo-West Pacific and dispersed into the Atlantic around South Africa. Population-level patterns in the Caribbean indicate extensive gene flow across the region.