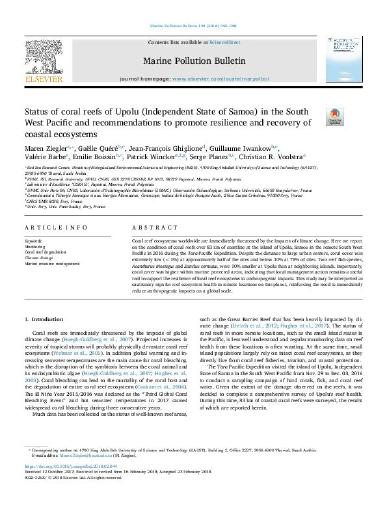 Coral reef ecosystems worldwide are immediately threatened by the impacts of climate change. Here we report on the condition of coral reefs over 83 km of coastline at the island of Upolu, Samoa in the remote South West Pacific in 2016 during the Tara Pacific Expedition. Despite the distance to large urban centers, coral cover was extremely low (<1%) at approximately half of the sites and below 10% at 78% of sites. Two reef fish species, Acanthurus triostegus and Zanclus cornutus, were 10% smaller at Upolu than at neighboring islands. Importantly, coral cover was higher within marine protected areas, indicating that local management action remains a useful tool to support the resilience of local reef ecosystems to anthropogenic impacts. This study may be interpreted as cautionary sign for reef ecosystem health in remote locations on this planet, reinforcing the need to immediately reduce anthropogenic impacts on a global scale.

This project has been funded through the Tara consortium, France Genomique grant number ANR-10-INBS-09, and KAUST baseline and KAUST BESE division funds to CRV. Tara Pacific consortium acknowledgement: We are keen to thank the commitment of the people and the following institutions and sponsors who made this singular expedition possible: CNRS, CSM, PSL, KAUST, Genoscope/CEA, ANR-CORALGENE, France Genomique (specifically grant number ANR-10-INBS-09), agnès b., the Veolia Environment Foundation, Region Bretagne, Serge Ferrari, Billerudkorsnas, AmerisourceBergen Company, Lorient Agglomération, Oceans by Disney, the Prince Albert II de Monaco Foundation, L′Oreal, Biotherm, France Collectivites, Kankyo Station, Fonds Francais pour l′Environnement Mondial (FFEM), Etienne Bourgois, UNESCO-IOC, the Tara Foundation teams and crew. Tara Pacific would not exist without the continuous support of the participating institutes. We wish to thank the Samoan government for granting sampling permission and supporting the expedition and the reviewer for comments that helped to improve this manuscript. This work is contribution number 3 of Tara Pacific.