Water quality, seasonality, and trajectory of an aquaculture-wastewater plume in the Red Sea 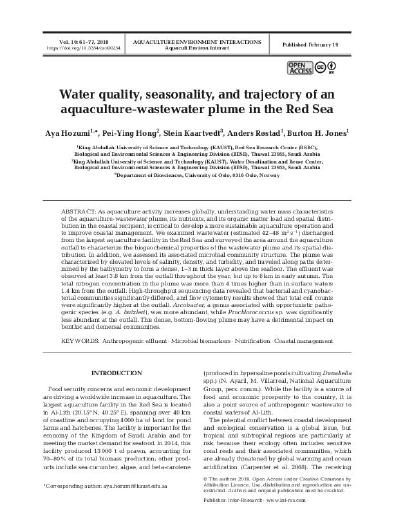 As aquaculture activity increases globally, understanding water mass characteristics of the aquaculture-wastewater plume, its nutrients, and its organic matter load and spatial distribution in the coastal recipient, is critical to develop a more sustainable aquaculture operation and to improve coastal management. We examined wastewater (estimated 42-48 m3 s-1) discharged from the largest aquaculture facility in the Red Sea and surveyed the area around the aquaculture outfall to characterize the biogeochemical properties of the wastewater plume and its spatial distribution. In addition, we assessed its associated microbial community structure. The plume was characterized by elevated levels of salinity, density, and turbidity, and traveled along paths determined by the bathymetry to form a dense, 1-3 m thick layer above the seafloor. The effluent was observed at least 3.8 km from the outfall throughout the year, but up to 8 km in early autumn. The total nitrogen concentration in the plume was more than 4 times higher than in surface waters 1.4 km from the outfall. High-throughput sequencing data revealed that bacterial and cyanobacterial communities significantly differed, and flow cytometry results showed that total cell counts were significantly higher at the outfall. Arcobacter, a genus associated with opportunistic pathogenic species (e.g. A. butzleri), was more abundant, while Prochlorococcus sp. was significantly less abundant at the outfall. This dense, bottom-flowing plume may have a detrimental impact on benthic and demersal communities.