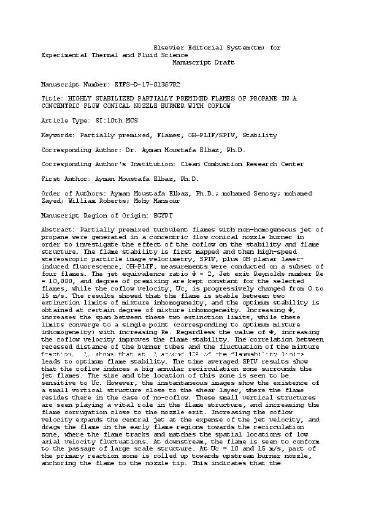 Partially premixed turbulent flames with non-homogeneous jet of propane were generated in a concentric flow conical nozzle burner in order to investigate the effect of the coflow on the stability and flame structure. The flame stability is first mapped and then high-speed stereoscopic particle image velocimetry, SPIV, plus OH planar laser-induced fluorescence, OH-PLIF, measurements were conducted on a subset of four flames. The jet equivalence ratio Φ = 2, Jet exit Reynolds number Re = 10,000, and degree of premixing are kept constant for the selected flames, while the coflow velocity, Uc, is progressively changed from 0 to 15 m/s. The results showed that the flame is stable between two extinction limits of mixture inhomogeneity, and the optimum stability is obtained at certain degree of mixture inhomogeneity. Increasing Φ, increases the span between these two extinction limits, while these limits converge to a single point (corresponding to optimum mixture inhomogeneity) with increasing Re. Regardless the value of Φ, increasing the coflow velocity improves the flame stability. The correlation between recessed distance of the burner tubes and the fluctuation of the mixture fraction, Δξ, shows that at Δξ around 40% of the flammability limits leads to optimum flame stability. The time averaged SPIV results show that the coflow induces a big annular recirculation zone surrounds the jet flames. The size and the location of this zone is seen to be sensitive to Uc. However, the instantaneous images show the existence of a small vortical structure close to the shear layer, where the flame resides there in the case of no-coflow. These small vertical structures are seen playing a vital role in the flame structure, and increasing the flame corrugation close to the nozzle exit. Increasing the coflow velocity expands the central jet at the expense of the jet velocity, and drags the flame in the early flame regions towards the recirculation zone, where the flame tracks and matches the spatial locations of low axial velocity fluctuations. At downstream, the flame is seen to conform to the passage of large scale structure. At Uc = 10 and 15 m/s, part of the primary reaction zone is rolled up towards upstream burner nozzle, anchoring the flame to the nozzle tip. This indicates that the stabilization of these flames in the presence of the coflow is controlled by the mutual interactions between the central jet and the coflow through the recirculation zone from one side, and the degree of the inhomogeneity of the central jet mixture from the other side.